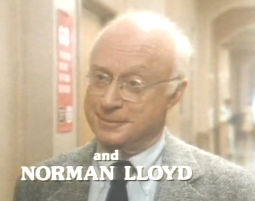 Norman who? You know that Norman Lloyd starred in “St. Elsewhere,” the best TV hospital show ever, from 1982-88. He was 74 years old when he wrapped his role as Dr. Daniel Auschlander, the head of that crazy institution. If you’re too young to know what I’m talking about, Howie Mandel was in the cast. Now he hosts game shows.

Norman Lloyd has all his marbles, he’s the 8th wonder of the world. In the 1940s he was a favorite of Alfred Hitchcock. He has dozens and dozens of credits before “St. Elsewhere,” and afterwards he appeared in shows like Night Gallery, Kojak, Quincy, M.E., The Paper Chase, Wiseguy, Murder, She Wrote, The Practice, and even the current hit, Modern Family. A couple of years he did a master class in Cannes.

His most recent appearance was in Amy Schumer’s hit comedy, “Trainwreck.” Back in 2007, he was the subject of his own documentary.