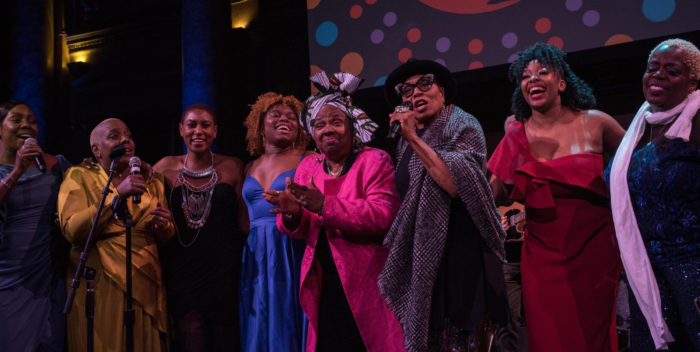 We were very excited this week about Tina Turner being in town. But there were other famous soul sisters making a beautiful noise this week in Manhattan.

The Queen of Memphis Soul, Miss Carla Thomas, star of the Stax Record label, surprised Dee Dee Bridgewater at Capitale on Wednesday night. The event was the WBGO 40th anniversary honoring Dee Dee and Andre Menard at the Champions of Jazz Gala.

Carla, who was featured in my film “Only the Strong Survive,” had dozens of hits alone, with Otis Redding, and with her father, the late great Rufus Thomas. A graduate of Howard University, she rarely ventures up north from Memphis. But when Dee Dee told WBGO how much Carla had influenced her, the station invited her up for the surprise event. Carla and Dee Dee even performed Carla’s great Isaac Hayes-written hit, “BABY (Baby),” featured in last year’s hit movie, “Baby Driver.”

I had lunch on Thursday before the Tina Turner show with Carla, and her sister Vaneese, who’s just released a wonderful new album called “Down Yonder.” You can listen to it below on Spotify. Vaneese — who was for years one of Aretha Franklin’s touring backup singers — is revered among music aficionados. “Down Yonder” showcases her phenomenal voice, and writing skills. She wrote all the songs on the album.

As for Carla, she’s still stylish, fun, and younger than springtime. She’s “only” 76. Her first big hit on Stax, “Gee Whiz,” came when she was just 16. Is she getting her royalties from Concord Records, which owns Stax, and Atlantic? “I think so!” she says with a twinkle in her eye. “I hope so!” We’ll be looking into that.

The Thomases and Tina Turner aka Anna Mae Bullock came from the same state but never crossed paths. Still, as Carla points out, Rufus Thomas made sure Ike and Tina got played on his famous radio station, WDIA, in Memphis. Imagine if Tina had gone to Memphis in the early 60s and met the Stax crowd! But she took her own unique path to stardom.

Tina, like Rufus and Carla– is NOT in the Rock and Roll Hall of Fame as a solo performer, just with Ike from their early days.