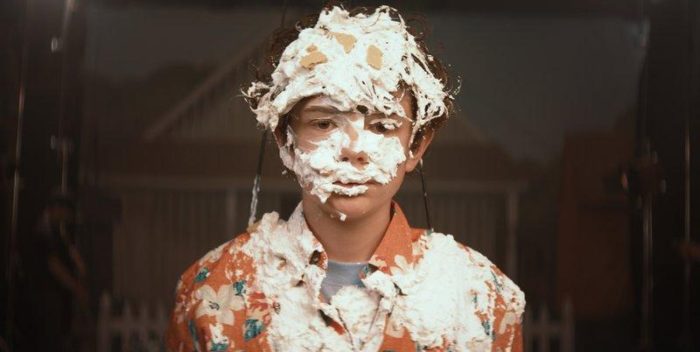 Shia LaBeouf’s autobiographical story of his tumultuous childhood, “Honey Boy,” is out today on amazon.com Directed beautifully by the first-time feature director, Alma Har’el, the powerful, moving, brutally honest film  hits you in the gut with humor, pathos and poignancy.

LaBeouf plays his father, James, a Vietnam veteran who is a drug addict and registered sex offender. He is also a manager/chaperone to his son’s acting career, which is his sole source of income. With his PTSD, his resentment towards his son and to the world, yet with a love for his son, the complexity of the performance is astounding. Young Shia, named Otis in the film, is played with an otherworldliness by Noah Jupe (“A Quiet Place”), the older Shia in rehab is played spectacularly by Lucas Hedges. James lives in a crap motel where prostitutes are neighbors, cigarettes are a treat, being a dude instead of a father and being emotionally and at times physically abusive. And yet his son, so much older than his years because of necessity, still loves him.

All the performances ring true to the soul, are raw and 100 percent authentic.  Har’el cinematically nailed it. The fact that LaBeouf wrote it really as a form of therapy and turned it into this painful, at times horrifying, yet loving, connecting film is simply a work of art. This must be seen by everyone. Shia LaBeouf exposes the deepest most vulnerable sides of himself and the riveting “Honey Boy” deserves much awards buzz because of it.