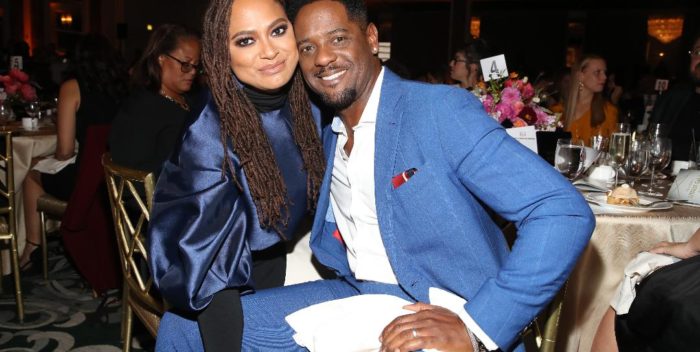 PEN America — traditionally thought of as a New York group– went west last Friday to Hollywood. Their annual had its LitFest Gala took place at the the Beverly Wilshire Hotel mixing celebrity flash with serious issues. 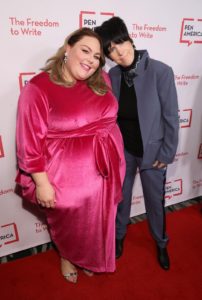 The PEN America Distinguished Leadership Award was presented to attorney Theodore J. Boutrous–  a champion of free speech who defends the rights of journalists — by none other than comedian Kathy Griffin.

Kathy noted, “I am very honored to be here since my Trump scandal two years ago.  I’m not a comedy snob, if you are in comedy, I think you are derelict in your duty if you don’t address this administration at all. I’ve never seen anything like it, I’m going to 59 next week.  Hey does anyone here have Mark Zuckerberg’s phone number?  I need to call that piece of shit. And how about Sheryl Fuckerberg? Lean back in bitch.”

Kathy went on to extoll Boutrous, who she said has helped her “stay out of jail.”  She then recounted a story about Salman Rushdie who was targeted for years with death threats and a fatwa.  “He was on my old show, ‘My Life On The D List’ one time and he told me as a joke that one day there will be a fatwa on my head.  There fucking is!”  Kathy then told the sobering story of how she was under investigation by the US Attorney’s Office and the Secret Service. She also said, “that I haven’t a paid day of work in 2 ½ years since this happened.  So, if you think it can’t happen to you, let me tell you, it can.”

Suzanne Nossel, CEO of PEN America got the night started and stated emphatically that free speech in under attack by a poisonous political environment.  “Words are being drained of their meaning. The opposite of truth is deceit.  And deceit and misinformation cheapen the value of words.  Deceit is becoming normalized.  We have a President that uses a wink and a nod to encourage his supporters to rough up journalists, and a White House menacing reporters and press outlets. That’s why PEN America has filed a lawsuit against the President.” 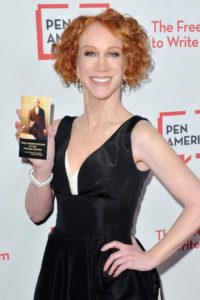 Ten time Oscar nominee Diane Warren was presented the Artistic Expression Award, for all her songs including many that provide fighting words for people who need an anthem. “This Is Us” actress Chrissy Metz performed Warren’s possibly 11th nominated song, “I’m Standing With You,”  from the movie, “Breakthrough.” Diane gave a heartfelt speech about how songs can become anthems for movements and be embraced by activists.

Julie K. Brown, who broke the Jeffrey Epstein story in the Miami Herald, noted that “Epstein got away with his crime because nearly every element of society allowed him to get away with it. No one said anything.  The people in the criminal justice system worked in concert with Epstein’s people to cover up his crimes and shielded him.” Brown went on to explain that Epstein “is only a symptom” and talked about the huge problem of human trafficking.

“This Is Us” actress Susan Kelechi-Watson presented the Award for Screenplay Excellence to Micah Fitzerman-Blue and Noah Harpster for their “A Beautiful Day In The Neighborhood,” in which she shines.  The team behind the Netflix hit “Unbelievable” —  Susannah Grant, Michael Chabon, Ayelet Waldman, Sarah Timberman — received the Award for Television Excellence.  LeVar Burton delivered an eloquent and moving tribute to literary giant, Toni Morrison.

Blair Underwood gave his longtime friend filmmaker Ava DuVernay passionate as ever, received the Voice of Influence Award. “To write, to create, to hold space, to represent and to establish representation for others.  To do these things, especially at this time, is a radical act.”