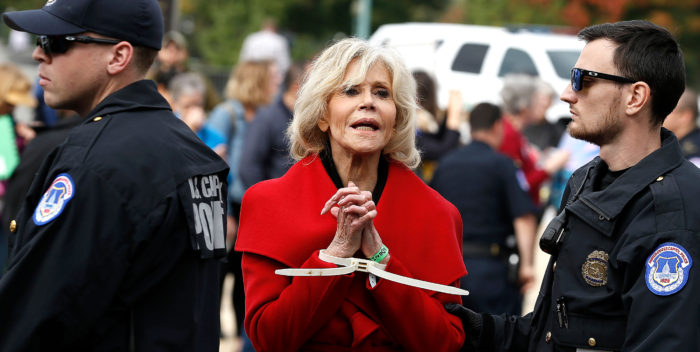 This morning Jane Fonda will be arrested for the fourth week in a row at the Hart Senate Office Building on Capitol Hill. Her colleagues in arms this week will be actresses Rosanna Arquette and Catherine Keener. There may be some others. Keep refreshing. Previous stars who’ve joined her include Ted Danson, and Sam Waterston.

This is the 4th “Fire Drill Friday” in which Fonda is committing “acts of civil disobedience” to make legislators take climate change seriously.

Jane Fonda’s 4th “Fire Drill Friday” will focus on the ways in which women carry the greatest burden imposed by climate change and how they will continue to play the leading role in the fight to win a Green New Deal, switch urgently to clean energy, and prevent new fossil fuel development.  “Efforts to turn back climate change can be exponentially enhanced if the needs and priorities of women were addressed. This is why the Green New Deal calls for inclusive representation of women in political and economic decision making around environmental and climate policies. Women bear the brunt and women hold many of the solutions to the climate crisis,” said Fonda.

Last Friday, Fonda– showing grace and humor (a pun on Grace and Frankie, her hit TV show)– accepted a Britannia Award from BAFTA will she was in full protest mode.

These protests are not for fun, and not to be ignored. Fonda is serious, and so should all of us be, about climate change. She’s putting in the time and walking the walk. That takes guts and courage for the 82 year old two time Oscar winner and political activist. Bravo, Jane!