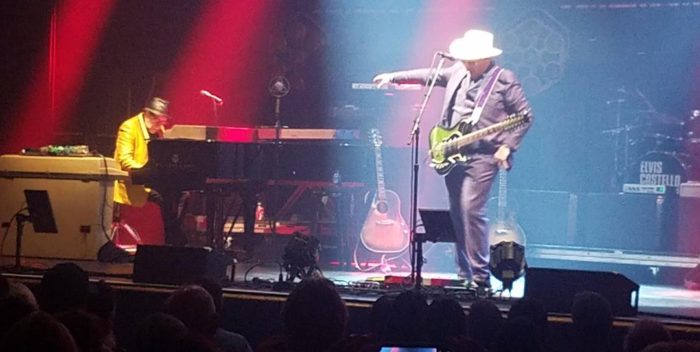 Elvis Costello’s first of two shows in Port Chester, New York (second is tonight, don’t miss it) was a phenomenal outing, combining old songs that hadn’t beenheard in a while, and newer ones from his terrific current album, “Look Now.”

But Elvis threw everyone a curve ball, including his band, when he segued from a 1981 song “Different Finger” to the famous Joe South classic 60s hit, “Games People Play.” He’s never played the latter before anywhere, and didn’t tell the band in advance that he was going to do it. When he finished the song, he got up from the piano, walked around the bench, and said, “I didn’t even know I was going do that.”

What does it mean? “Different Finger,” from Costello’s 1981 “Trust” album, is about cheating spouses. Costello hadn’t played it live until last night since 2013, and then only a couple of times. The medley of these two songs might raise questions about Costello’s home life, but he’s also a pretty good fiction writer so maybe he saw a juxtaposition. (He’s been married to singer Diana Krall for a long time.)

Otherwise, Elvis wasn’t terribly talkative during the show, but he and the Imposters– Steve Nieve, Pete Thomas, Davey Farragher– were on fire. This foursome makes a huge, beautiful noise, ferocious at times, gorgeously melodic at others. Together for well one 40 years, give or take, they are as supple as ever. These shows highlight songs from “Trust,” so including “Different Finger” wasn’t completely out of left field. But I– having been there in 1981– reveled in “Clubland,” “Watch Your Step,” and “Strict Time” and even wanted more. Those songs hold up, and EC and the Imposters play them with the same urgency as they did in ’81.

There were also a couple of songs– not enough — from “Look Now”: the Philly soul catchy “Suspect My Tears,” the angry “Unwanted Number,” and the lovely “Photographs Don’t Lie.” The “Look Now” album was released after Grammy eligibility last year so it’s eligible this year. It should be nominated in rock album, or traditional rock or pop, but I’m sure it won’t be. That’s the way it goes.

Of Costello’s older songs, there’s a really dramatic presentation of “Watching the Detectives” with a cool video of pulp paperback novels. Elvis is playing the title song from his upcoming Broadway show, “A Face in the Crowd,” based on the movie, which he says we’ll be seeing on stage next year. I was especially thrilled to hear “Crawling to the USA,” a favorite from his early career that has never lost its punch.

Elvis Costello is 65 years old, which is hard to believe since we knew him when he was 25. (I am three years younger, the whole thing is maddening.) He remains the great artist of my age group, the survivor, a force to be reckoned with, a unique, remarkable gift to popular music. And he was in a good mood last night, which is always nice.