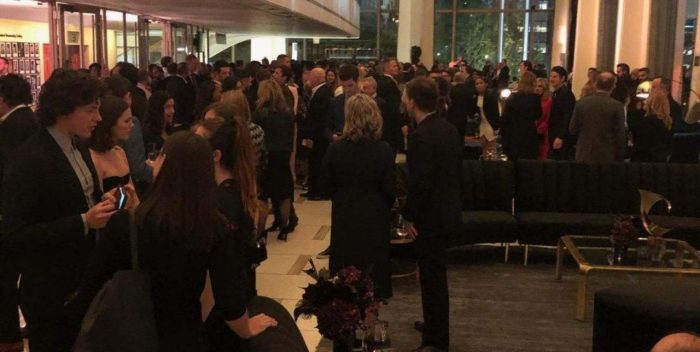 Well, I liked “The Morning Show.” Apparently, I was alone.

The Jennifer Aniston-Reese Witherspoon soap opera about network television has a 59 on Rotten Tomatoes. The Hollywood Reporter has a feature on how much critics don’t like it, and also why Apple TV doesn’t need to exist. That story was picked up by the Drudge Report. So now everyone knows.

Apple TV has no good will in the press. Whoever’s handling it has done such a great job that critics turned on them like a pack of wild dogs.

Still, last night, Apple threw themselves a gigantic, expensive party in Lincoln Center at what used to be Avery Fisher Hall. It’s on three or four levels, and is massive. I got pictures back from the lobbies of what one journo called “a thousand people.” They were pictures of people who I guess have iPhones. That’s how your entry was qualified.

I liked “The Morning Show.” Of course, we’ve only seen three episodes. Steve Carell is signed for all 10 episodes, and he plays a Matt Lauer- like anchor who gets fired for sexual harassment. But it does seem at the end of episode 3 that Carell’s Mitch Kessler will be redeemed, and that maybe his main accuser (Ahna O’Reilly) will turn out to be a nut. If that’s the case, then O-M-G for #metoo. That would be a twist, but not the Peppermint Twist.  It wouldn’t even be Oliver Twist saying “Please, sir, can I have some more?”

Rolling Stone’s Alan Sepinwall disagreed with me completely. He wrote: the show “feels like it could have aired on broadcast TV anytime in the last 15 to 20 years, so long as the profanity got cut,” and drew comparisons to HBO’s “The Newsroom,” observing “it’s Sorkin without Sorkin, lacking the snappy dialogue, the soaring rhetoric, or any attempt whatsoever to argue for why anyone should care about the future of this show-within-the-show.”

I, like many others, have no idea how to get Apple TV besides on the press site. Will it suddenly appear on Smart TVs? (Just as Amazon has left my 2013 Sony Bravia that cost a thousand dollars.) And will we ever know if anyone watches these new shows? No, we will not. And I guess it doesn’t matter. But Apple has committed $15 million each to 20 episodes. The price of that iPhone will be going up.

PS Name all the famous faces in the photo above at Apple’s Morning Show launch.