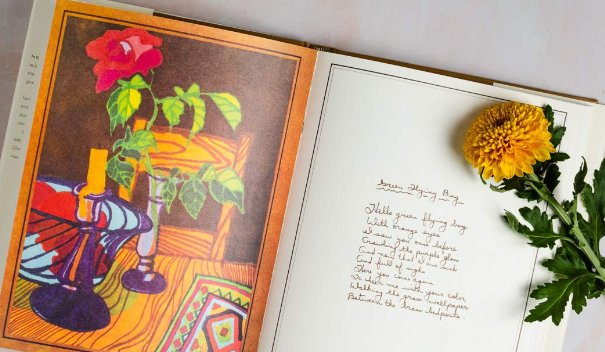 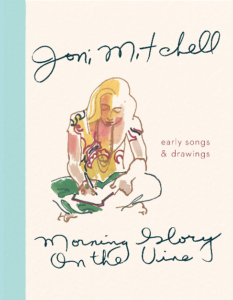 The depth and breadth of Joni Mitchell’s work extends far beyond her music, which is something in itself. But Joni is also a visual artist, who began painting at least around 1960. Her watercolors were always known to her fans and to followers of her music cohorts like Crosby, Stills, Nash and Young, and James Taylor.

Now she’s released a coffee table book called “Morning Glory on the Vine,” which for the first time collects these watercolors and joins them with poems, songs, and drawings. They are just sensational. If she released them as prints, Joni would make a fortune.

The book is like a companion to David Browne’s recent book on “Crosby, Stills, Nash and Young.” Joni’s portraits include all of them, as well as James Taylor, Judy Collins, their manager and friend Elliot Roberts. There’s also a portrait of George O’Keefe that is stunning. (No Stills, however. I can only imagine why.)

Joni includes self-portraits, and across from a poem called “Tapwater,” a magnificent still life. Her pictures here, made during her folkier earlier “Blue” era, etc actually breathe with the soul and jazz that was to come just a couple of years later starting with “Court and Spark,” including “Mingus” and “Hejira,” and my favorite, “The Hissing of Summer Lawns.”

We are really lucky to get this collection. Joni says in her foreword that for Christmas 1971, David Geffen and Elliot Roberts bound up all these drawings in a ring binder accompanied by handwritten lyrics. Joni says her friends then were “kind of nouveau riche,” so buying gifts for them would be difficult. Instead, they got this limited edition. “People really liked them,” she says, which is an understatement. ‘

PS It’s a good year for coffee table books about or by rock stars. Linda Solomon’s book of Aretha Franklin photos is out, and David Browne’s work with the Jeff Buckley estate has been put in a handsome volume. More about them next!