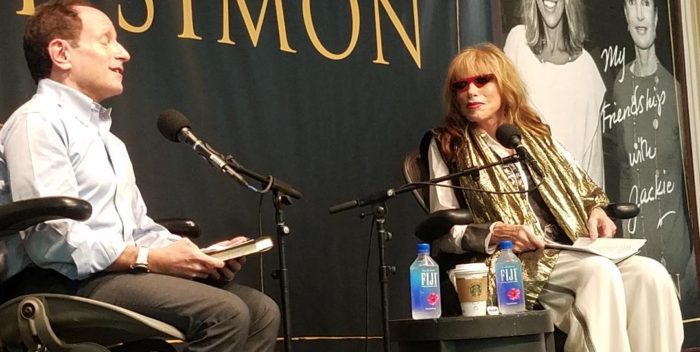 Barnes & Noble in Union Square doesn’t often get bona fide rock stars to sign books for fans. But they did Tuesday night, despite raw weather, a cold steady rain, and the World Series starting on TV.

The rock star was Carly Simon, who filled the 4th floor stage area of B&N with appreciative fans who waited 30 minutes past the scheduled time of 7pm to see the singer of “You’re So Vain” and dozens of other hits. (Carly is still not in the Rock and Roll Hall of Fame, which is nuts.)

They got to see a short Q&A between Carly and moderator Bill Goldstein of the New York Times Book Review online. Simon was decked out in a pants suit covered by a snazzy sparkly scarf. She wore very hip sunglasses she’d purchased at Barneys earlier in the day along with a gold watch she gifted herself. (They don’t have such meta-department stores on Martha’s Vineyard, you know.)

The book is called “Touched by the Sun: My Friendship with Jackie,” and it’s already number 6 on amazon.com best seller list after a few hours. It’s a touching and somewhat revealing look at the most famous and private first lady in the last years of her life.

The title of the book is taken from a song Carly wrote for Jackie in the early 90s, and appeared on a couple of her albums. To commemorate the occasion, Simon asked her long time producer/mixer/engineer Frank Filipetti to remix the track from her “Live at Grand Central” concert. They released the new version today. “Live at Grand Central” was Jackie’s idea, Carly said. Onassis was a huge reason Grand Central Station was restored in the 1980s.

Carly played the show on April 2, 1995, almost a year after Onassis died. The concert aired on Lifetime, was issued on VHS, and has since disappeared. But soon the whole album will be released in remixed form on CD, DVD, and for streaming. Watch this space.