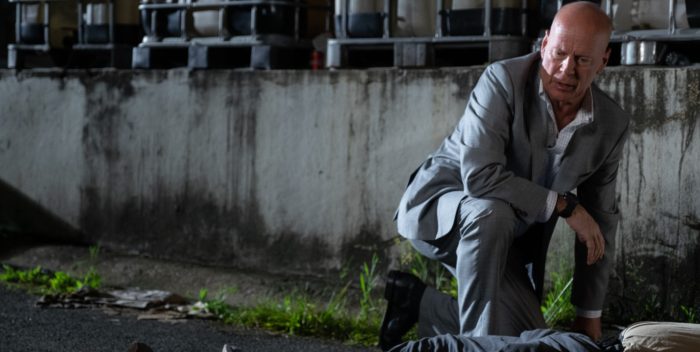 The latest in a trilogy of straight to video D list movies with Bruce Willis is coming December 6th. “Trauma Center” looks like it cost four dollars. Bruce speaks haltingly in it, and not just because of the screenplay. It does seem like the main action is set on a young actress, Nicky Whelan, who is stalked in an empty hospital by killers until Bruce returns to save the day after leaving her there “safely.” Willis looks like maybe he worked a day or two. Same for Edward Norton’s “Motherless Brooklyn,” in which he disappears after 10 minutes.

“Trauma Center” is the middle piece of garbage after “10 Minutes Gone” — which had a total worldwide box office of $13,679 according to the Internet Movie Data Base– and before “The Long Night.” A couple more look like they’re in the planning stages. Whoever cut these deals is doing Bruce, who’s got to be wealthier than Zeus, no favors for his legacy. The movies are terrible, he’s not the star, and he looks and sounds terrible. The movies don’t play in the theaters, and they’re even hard to find on video platforms. Isn’t there a better way to deal with Bruce’s situation? He was a mega star at the box office, and charming as hell.

Nicky Whelan is the queen of D list movies. Her resume is a long recitation of titles you’ve never heard. She has the background, though: at least three movies with Nicolas Cage, whose Oscar is in the pawn shop.