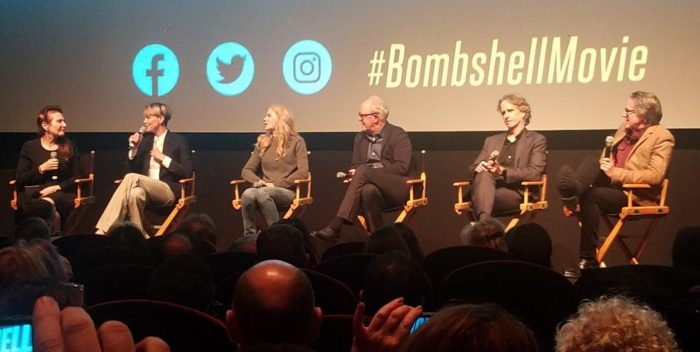 As the Oscar season narrows down, many nominations are coming into focus. I see a lot of lists on Gold Derby and other places, some with spot-on choices and others with longshots longer than Donald Trump asking Nancy Pelosi to replace him in the White House.

Now comes a big monkey wrench into the mix: Jay Roach’s “Bombshell,” all about Roger Ailes’s reign of terror against the women of Fox News. It was screened last week in Los Angeles, and last night in New York for SAG and some press. (The moderator, Lynn Hirschberg, of W Magazine, was a lively relief. Let’s have her some more!) “Bombshell,” from Lions Gate, doesn’t open until December 20th. There’s a review embargo. So this isn’t a review, just an observation.

And another cliche: “Bombshell” upsets the apple cart for the women’s acting categories. Charlize Theron is absolutely going to be Renee Zellweger’s main competition for Best Actress. Theron’s performance as Megyn Kelly is as immersive as Zellweger’s as Judy Garland. If I were Kelly, I’d look in the mirror and make sure I’m still there. Theron is inhabiting her.

“Bombshell” really clouds up the Best Supporting Actress and Actor categories. Nicole Kidman and Margot Robbie, respectively, as Gretchen Carlson and a fictional Fox employee (a composite of Ailes’ victims) will take two of the five supporting slots. Lithgow, as Ailes, has to be nominated in supporting.

Also, as someone whispered to me last night, “Bombshell” has quite the ensemble. They will be recognized for that.

“Bombshell” will also be occupying slots for Best Picture, Director, Screenplay. The weird thing here is that the movie will beat the Showtime series, “Loudest Voice in the Room,” to awards activity. The Oscars will precede the Emmys by six months.

“Loudest Voice,” which starred Russell Crowe and Naomi Watts, was excellent. But it aired in summer, when viewership is low. A lot of people didn’t see it. The six episodes are wonderful but have a different tone and temperament than a two hour movie. They are different animals.

I’ll tell you more about “Bombshell” when the embargo ends. But as a former Fox victim, I can say I was totally caught up in it. And you will be too. My only question is, how do we feel about these actors playing really awful people? Because the women — despite being sexually harassed — were not forced to deliver, day after day, crazy right wing opinions, Fake News, and so on. That’s something that will be debated. Much as they are all impeccably portrayed, these are real people you cannot congratulate or honor.