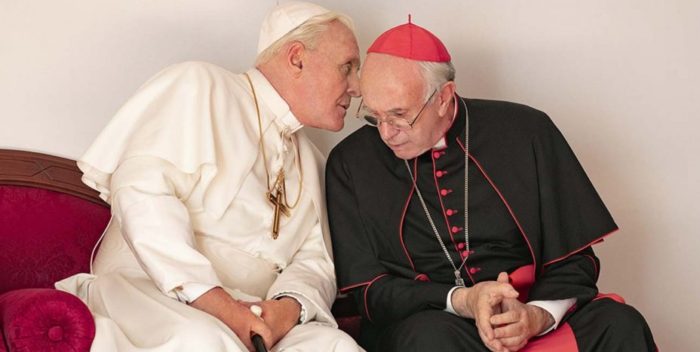 I know that theater owners are going crazy, in a tug of war with Netflix over 30 days or less windows in cinemas before the TV streaming service pulls their movies and puts them basically on TV, computers and phones.

But this year, this year, not next, we’re going to have to deal with the Netflix situation. They are going to have three of the nine Best Picture nominees at the Oscars, not to mention all the people who worked on them. And I’ll tell you what’s happened: before Harvey Weinstein lost it, he was kind of mentoring Ted Sarandos. Not in being a predatory fool, but in quality movie making and in good taste. Everything Netflix is doing now mirrors Miramax’s heyday. It took chutzpah to think “Roma” was going to win the Oscar. Sarandos went for it. Harvey would have done the same thing.

Now Netflix has a triumvirate of films carved right out of the Miramax playbook. Martin Scorsese’s grand, essential “The Irishman,” Noah Baumbach’s intimate, funny “Marriage Story,” and Fernando Mereilles’s gorgeously made “The Two Popes.” I saw the latter Sunday evening at the Hamptons Film Festival, and I was floored by its magnificence. It’s A plus work.

Don’t forget, Mereilles and his crew received four Oscar nominations in 2004 for “City of God,” including Best Director. If, if, if…if Miramax or The Weinstein Company still existed, “The Two Popes” would be their movie. It’s that high quality, from beginning to end and everything in between.

This is also a “What if” kind of story, a historical adventure that mixes fact and supposition in the most charming way. Working at the top of their games, Anthony Hopkins and Jonathan Pryce play respectively Pope Benedict XVI and the current pope, Francis. Benedict ruled from 2005 to 2013. He was the first Pope to step down since 1415. He is still alive at age 92. Francis, upon succeeding Benedict, became a worldwide sensation. I went to with Aretha Franklin to meet him in Philadelphia a few years ago. It was a remarkable experience.

When the German born Benedict (whose given name is Joseph Ratzinger) was getting ready to retire, screenwriter Anthony McCarten imagines a meeting between him and the would-be Francis, the Argentinian cardinal Jorge Mario Bergoglio. Their burgeoning friendship, and the story of Bergoglio’s political life in Argentina, is the center of “The Two Popes.” Ratzinger is clear: he doesn’t like any off Bergoglio’s opinions or stances. So they are an odd couple. But Ratzinger realizes Bergoglio is the future. So he’s smarter and more with it than we think.

Mereilles has made another film with Hopkins– “360”– which received harsh reviews and a very low critics score. His other English language film was “The Constant Gardener,” which won Rachel Weisz an Oscar and also starred Ralph Fiennes. Maybe knowing Hopkins helped here, because the Oscar winning star of “Silence of the Lambs” does his best work in eons, harkening the beautiful, elegant turns in “Howard’s End” and “The Remains of the Day.” Pryce, who was overlooked last year in “The Good Wife,” is every bit his equal, and Pope Francis should be sending him champagne and flowers. They are each stunning performances. You can’t get enough of them. (The only thing better would be Judi Dench playing a nun who chats with them.) And the work below the line– set and production design, costumes, etc is going to rack up nominations. Kudos to Mark Tildesley, who went from this movie to the new James Bond.

PS I don’t know if Mereilles or McCarten actually know if the popes like the Beatles, but they use the Fab Four as a kind of running gag. In the movie, Benedict seems to be ignorant of the group, but in real life he absolved John Lennon from his famous “The Beatles are bigger than Jesus” line in 2010, well before this imagined meeting takes place. Later, Pope Frances gives Benedict a Beatles gift that’s a pretty good plug for “Abbey Road.” Maybe McCarten and McCartney are friends, who knows? But Sirius XM’s Beatles channel should get an audio clip to play before “Eleanor Rigby.”