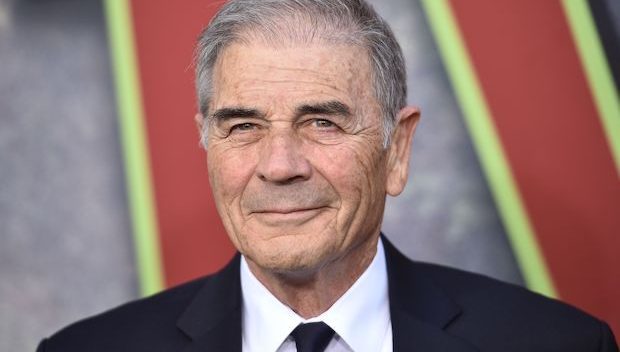 So Robert Forster: he was a great guy, I’m not kidding. Everyone loved him. He was the opposite of someone who makes it in Hollywood and then becomes inaccessible, walled off. After his Oscar nomination for “Jackie Brown” in 1997, he shrugged it off, appreciated what Quentin Tarantino did for him, and went to work with one terrific performance after another.

The announcement of his death last night, from a very sudden brain cancer, really shook me. I’d been a fan all through the 70s and 80s. Check him out from his TV appearances on shows like “Police Story” and “Bannon.” Then Tarantino rescued him from obscurity and made him the star of “Jackie Brown.” That’s when I met him, and we fell into an easy occasional friendship. I think everyone who knew him felt the same way probably. When he saw someone he liked, he really liked them: handshakes, hugs, a big wide smile. If he really really liked you, he gave you his favorite gadget, a silver letter opener with a wide handle. “This is the greatest thing  I’ve ever used!” he’d exclaim. He meant it.

Bob was from Rochester, New York but he had a nasal, flat, Chicago accent for some reason. You thought he was going to say “Da Bears,” when he spoke. With his height, and enthusiasm, the accent, he was so unlike everyone else in Hollywood. How could you not like him? He’d seen the highs, the lows, new highs. He was not impressed by the trappings of fame. He was just an actor.

I cheered, along with his other friends, when we saw him in Alexander Payne’s “The Desecendants” or in the revived “Twin Peaks,” basically replacing his old friend, Michael Ontkean. “Twin Peaks” was so nutty, I had to ask him one day, did he know what was going on?

“I didn’t understand a word of it!” he told me. “But I love David Lynch. This guy is a genius. You just have to trust him.” And so he did.

In 1990, to pick a year and a credit, Bob starred in a great little indie film called “Diamond Men” with Donnie Wahlberg. If you can find it online, watch it. His old, dear friend Kathie Berlin, one of the great publicist in Hollywood history, got everyone ginned up about it. We thought Bob would get another award. But there was money behind it, so “Diamond Men” faded into history as a lost gem. But just watch him in it. There isn’t a false note.

Bob had another long friendship in Hollywood, with Dani Janssen, the widow of “Fugitive” star David Janssen. He’d known David, who died way too young, and Dani was the doyenne of Hollywood for decades, so they palled around and accompanied each other to a lot of parties in the 2000s, before Dani– also much beloved– retired from the scene. They were a great pair to hang with because they knew everything, and said very little. They could have been characters out of “Once Upon a Time in Hollywood,” survivors of their own golden era who wouldn’t stand down. And I was so glad they didn’t.

Bob has a great girlfriend, Denise, and a big family of kids and grandkids. He  has fans from all his shows, too. But he leaves a legacy of friends, from actors and journalists to just a lot of people he handed that letter opener to, who will never forget him and always clap when they see him pop up on their screens. I will really miss him.