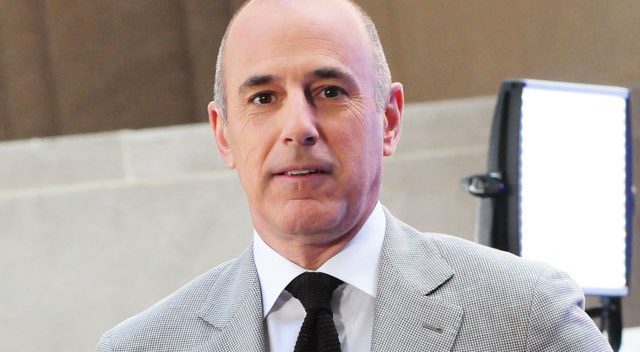 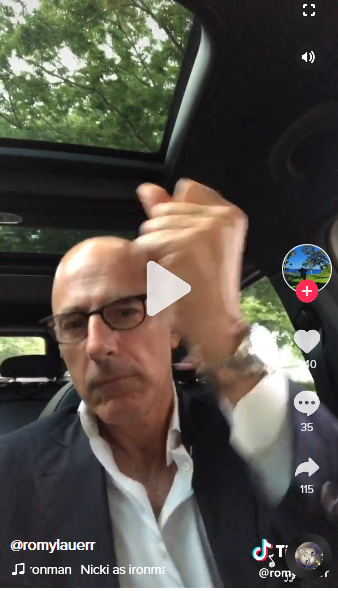 On Instagram wannabe TikTok this morning, Matt Lauer’s teen daughter has posted a video of her and her dad, filmed in an SUV, lip-syching to a rap song. Lauer begins the video lip synching the words “I am inevitable,” and snaps his fingers while making a scary face. Then Romy “I’m a bad b–ch, f–k the b–ch” from the Nicki Minaj song “Chun Li.”

It turns out Lauer is indeed inevitable. A former NBC colleague is accusing him of rape this morning, in an excerpt from Ronan Farrow’s book, “Catch and Kill.”

(The excerpt was given to Variety, which is weird on its own since Farrow’s employer, The New Yorker, has just run three fairly boring excerpts from the book online. Farrow has been triple dealing with the press, also giving an “exclusive” interview to the Hollywood Reporter. If I were the New Yorker, I’d be asking for my money back.)

In the Variety excerpt, Brooke Nevils says she went to Lauer’s hotel room at the 2014 Sochi Olympics, where he raped her anally. They continued to have sexual relations for some time after, which I don’t understand and you may not either, but Nevils felt she was in a situation with Lauer that she couldn’t escape.

“Matt Lauer’s conduct was appalling, horrific and reprehensible, as we said at the time,” NBC News said in a statement to Variety. “That’s why he was fired within 24 hours of us first learning of the complaint. Our hearts break again for our colleague.”

Lauer responded in an open letter: “In a new book, it is alleged that an extramarital, but consensual, sexual encounter I have previously admitted having, was in fact an assault. It is categorically false, ignores the facts, and defies common sense.”

True or not, the accusation from Nevils, communicated through Farrow, and now in his book, ends any chance Lauer had of a comeback on TV. But worse, the fallout for his kids is mind blowing. And the timing of the TikTok release, for his daughter, is almost sinister. But I’m more concerned that in the TikTok video, the daughter isn’t exactly lip synching Taylor Swift. So we may already be seeing the effect on his kids of all these scandals. Very upsetting.