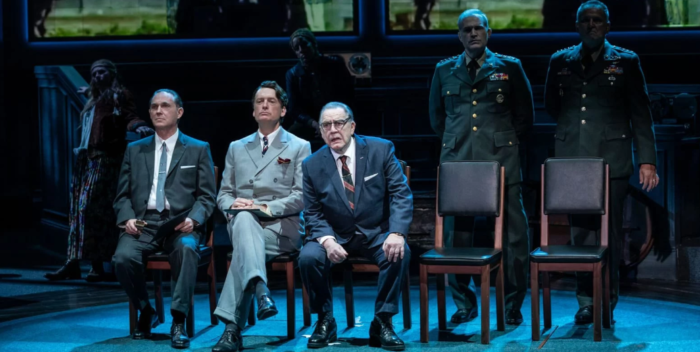 I’m a little late to the table on the new Broadway hit, “The Great Society.” That’s because everyone got home late Tuesday night after a smashing opening and party at the newly renovated Red Eye Grill on Seventh Avenue.

Among the guests was former US Senator and basketball great Bill Bradley, who certainly appreciated Robert Schenkkan’s second play about President Lyndon Baines Johnson. The first installment, “All the Way,” won a ton of prizes for the playwright and the star, Bryan Cranston.

Part 2, so to speak, focuses on LBJ’s descent into madness over the Vietnam War even while still pursuing his Civil Rights causes and historic legislation. Vietnam simply overwhelmed Johnson, and Cox, I thought, brilliantly conveyed that through Schenkkan’s cleverly constructed architecture. Cox had just three weeks of rehearsal, he told me, coming off his hit run on the HBO drama, “Succession.” He plays LBJ as a King Lear type, a slowly dissolving leader who can’t read the signs of his own demise. He’s quite brilliant.

So is the rest of this talented cast including Marc Kudish as a loutish Mayor Daley of Chicago, David Garrison in multiple roles (Nixon, George Wallace among them), Richard Thomas as Hubert Humphrey, Bryce Pinkham as RFK, Frank Wood, Gordon Clapp, and most especially Grantham Coleman as Martin Luther King, Jr.

I’ve rarely seen such a star studded audience, but in the crowd were Oscar winner F. Murray Abraham, Tony Roberts, Patricia Clarkson, Ben McKenzie and Morena Baccarin, Marsha Mason, Broadway greats Tony Yazbek, and Norm Lewis, Eric Bogosian, the beloved Barbara Barrie (the mom from “Breaking Away” one memorable role on a long list), Alan Cumming, and Broadway’s secret weapon, Kristine Nielsen, who has 2 recent Tony nominations under her belt. Ms. Nielsen is so hilarious and such a talent, I’m waiting for one of the geniuses at Netflix, Hulu, Amazon, HBO to demand her into one of their shows. Amy Sherman-Palladino, this woman has to be in the next season of “Mrs. Maisel.” Take heed!

It’s hard to pull this off. “All the Way” was a big hit, so comparisons abound at the Vivian Beaumont at Lincoln Center. Don’t get involved in that. Directed Bill Rauch has made masterful use of the Beaumont’s stage, bringing a real sense of intimacy to and immediacy to this piece of history. It’s a history that we are right now repeating in many ways, and that point can’t be underscored more. “The Great Society” must be seen not just by those of us who remember it, but by those to whom it will be a revelation.

PS David Garrison is a hilarious Richard Nixon in this play. Don’t miss him. Believe it or not, I met DG in 1980 right before he got his first big starring role on Broadway in “A Day in Hollywood/A Night in the Ukraine.” He went on to immense success on TV’s “Married with Children.” But he’s back doing what he loves most, and it shows.