Who is a real American, anyway? The answer used to be: the pilgrims, the people who came over from England on the Mayflower in the 1600s. The expression “came over on the Mayflower” is used to describe that gang.

So guess who is a real American? Why, Edward Snowden, the whistleblower who is now living in exile in Moscow. He helped publish reams of classified documents, was featured in an Oscar winning documentary as Citizen Four, and is Public Enemy Number 1.

In his new memoir, “Permanent Record,” Snowden reveals a shocking detail: he’s from a Mayflower pilgrim family. Remember the famous pilgrim couple, John Alden and Priscilla Mullins? We learn this in first grade. They almost weren’t married because Myles Standish tried to get in the way. Henry Wadsworth Longfellow wrote a famous poem about the triangle. (Do they still teach this?)

Anyway, John and Priscilla had a daughter named Elizabeth. Snowden’s mother is her direct descendant, he says, down the line through all the women.

So the joke’s on us. Who’s a turkey now? But it makes sense. John, Priscilla, and Myles all left England because they were unhappy with the King. They wanted to start a new society. Four hundred years later, their descendant, Edward Snowden, basically did the same thing. Only the pilgrim family wound up in North Carolina. Snowden is in Moscow. And he ain’t coming back. At least, not while Donald Trump is in office. 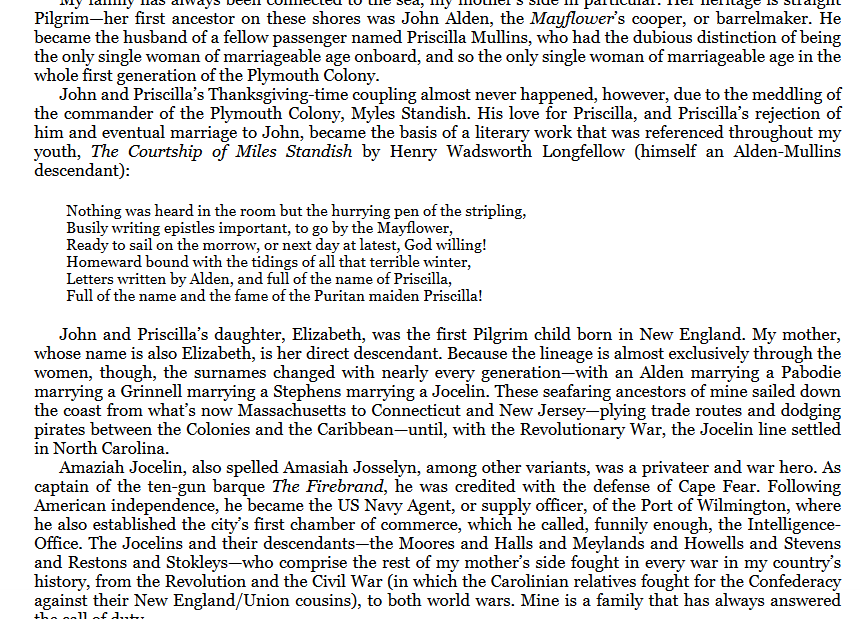