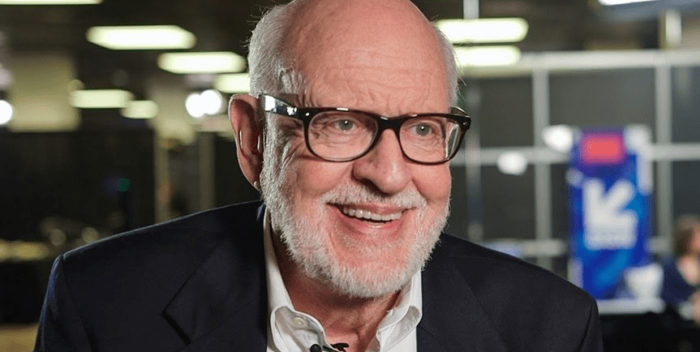 I guess only Rian Johnson could persuade Frank Oz to take an onscreen role in a comedy.

But the director of “Star Wars: The Last Jedi” had the upper hand; Oz has been voicing Yoda, the rabbi of “Star Wars,” since 1977.

Oz has not only played Yoda through all the “Star Wars” movies, he’s been the motivating reason why the Muppets have gone on to fame and glory in their movies and all their TV shows following their introduction on “Sesame Street.” Oz began his career as a puppeteer, and now may be the most famous of all time. Oz has also directed some classic movies including Steve Martin’s “Bowfinger,” Kevin Kline in “In and Out,” “Dirty Rotten Scoundrels,” “Little Shop of Horrors,” “The Muppets Take Manhattan,” and “The Dark Crystal.”

In “Knives Out,” which wowed Toronto Film Festival audiences this past week, Oz plays the only normal character, the estate lawyer for the crazy Thrombey family. Their patriarch (Christopher Plummer) has died– either by murder or suicide– and Oz’s character presides over the reading of his last will and testament. Daniel Craig plays a mysterious investigator hired to solve the crime– with a Southern drawl, no less, he is hilarious. Among the suspects are Jamie Lee Curtis, Chris Evans, Don Johnson, and Toni Collette. Ana de Armas plays Harlan Thrombey’s loyal nurses aide.

On screen previously, Oz has a couple of walk ons or cameos long forgotten. But his turn in “Knives Out.” whichopens November 27th, is his first real role with lines and a purpose. He’s only 75, so maybe this is just the beginning of a new career!  “Knives Out” already has a near perfect score on Rotten Tomatoes. But a wise choice to have Yoda advising a nutty, wealthy family. As usual he’s the voice of reason!