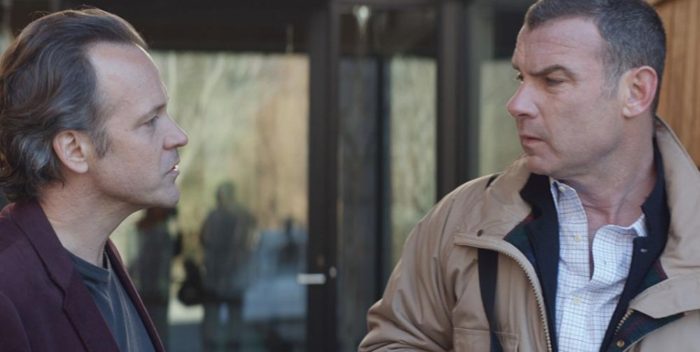 The super-rich, the wannabe rich, the compromises we all make in work and marriage, all bound together by a hardworking waiter being hit on his bike, and thrown in a ditch while the car drives away on a dark road.  Then the film flashes back to an earlier time and splits into three different parts, each following a different character in their own respective drama and all beginning from the same moment.

Schreiber plays Drew Hagel, an insecure real estate agent who has gambling issues.  His daughter, Shannon, played wonderfully by Maya Hawke, is dating Quint Manning’s (Sarsgaard) son Jamie (Fred Hechinger.)  Oh yes, the family happens to be worth billions.  Drew invests money he doesn’t have with Quint which goes south quickly.  Marisa Tomei wonderfully plays Quint’s wife Carrie, an embittered former actress who lives a life of luxury but is completely unhappy.  So, she buys and renovates an old theater in their chic suburban neighborhood, hires her board of directors including a professor, played by Paul Sparks, who is a fan boy of hers.

Looming all along like a cloud hovering, is the hit and run accident. Meanwhile Shannon falls for the more rough and tough Ian (Alex Wolff) fueling a melodramatic romance there.  And the drama continues.  What makes this film so alluring, besides the social commentary, i.e.: the rich and their rules vs the non-rich, is that it all weaves together making “Human Capital” a provocative, compelling and totally enjoyable film. Audiences will eat it up!