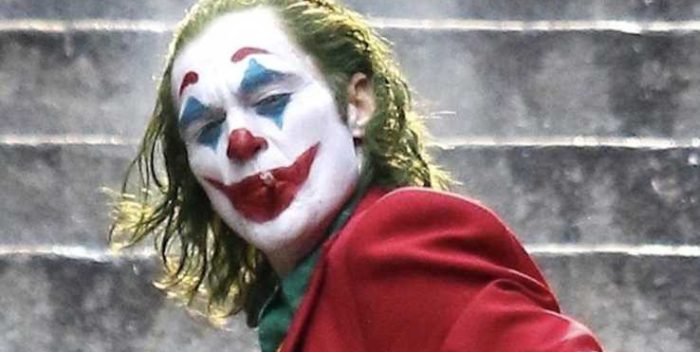 Joaquin Phoenix received cheers and a standing ovation tonight in Toronto for his starring performance as the “Joker.” Todd Phillips’ origin story of Batman’s villain is super violent but also a magnificent comic book opera. The movie’s look and feel are extraordinary and the acting from all the players is top notch. The story owes its life to two Scorsese movies, “King of Comedy,” and “Taxi Driver.”

The Scorsese samples aside, director Phillips’s film on its own is the story of a misfit, a loner, in the early 1970s. Fleck is clearly saddled with mental problems and a rich inner of imaginary success and a girlfriend (the very very good Zazie Beetz). But he’s plagued with taking care of his ailing mother, the sweet Penny (also excellent Frances Conroy) who– we learn in a bit of Batman revisionist history– once worked for millionaire Thomas Wayne.

And that’s where the non Scorsese plot kicks in: Penny believes that she and Wayne had a relationship that produced Arthur. Is it true? Or is it a fantasy? Whichever is the case, Arthur’s lack of a father and his hatred for the world he cannot access– successful, happy people– is what fuels his psychosis and his unrepentant violence.

The violence is extreme. That’s a warning to those who will need to shade  their eyes a couple of times when Arthur just snaps. Phoenix’s Joker is not Cesar Romero’s or Jack Nicholson’s or even Heath Ledger’s. He is deranged. He commits the worst crimes imaginable without thinking twice. He is cracking jokes, but ones only he thinks are funny. That’s important to know, going in. He’s not trading quips with Adam West.

Still, the physical production of the film is so full of art and wit, the violence can be put aside. Phillips has lots of little gracenotes that the audience will love, be on the lookout for them. (There’s one that we can talk about after the movie opens.) Phillips has made an origins story movie but it’s also a standalone, so “Joker” functions on many levels.

As for Phoenix, he is the odd duck of his generation, but he’s also kind of a genius. He’s uniquely gifted. I’d say this is his best work, but he’s had so much of it. You will be shocked by his weight loss in this movie. Arthur is emaciated to the point  where Phoenix contorts his body, much as he did in “The Master,” so that his mental pain is expressed in the physical.

But this is acting. Don’t mistake Phoenix, who’s back to normal weight now and very funny in real life, for Arthur Fleck. His ability to breathe life into these strange cinematic creatures can’t be underestimated. They reside in a stratosphere of originality.

And oh yes, Best Actor (because that’s all anyone’s interested in these days)? He’ll be there, leading a list that so far includes Michael B. Jordan, Leonardo DiCaprio, Adam Driver, and possibly Christian Bale, plus names to come. But Phoenix is at the top. The standing ovations are real.