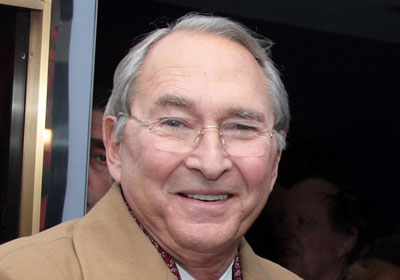 So you’re a billionaire, you don’t care about movies or culture, just rent.

That would be Sheldon Solow, worth five billion dollars. He’s shut down two of the last independent movie theaters in New York: the Paris, and the Beekman.

The Paris, across from the Plaza Hotel, was the most important. It’s also 77 years old. The last movie to play there was Ron Howard’s Pavarotti documentary. The closing was threatened all summer, no one did anything about it, so this guy shut it down. It will be replaced with some ghastly retail venture like Sephora or something else we already have and don’t need. How about a Duane Reade?

The Beekman on Second Avenue was the second iteration of the original Beekman, which was at 65th and Second. That one was closed in 2005 so some useless building could be erected. (Next to it was the great Swanson’s ice cream parlor, also demolished.) The great neon signs that lit up the Beekman were rescued, and now live inside the Greenport, Long Island movie theater, across from the Shelter Island Ferry. I was so happy to see them recently I almost hugged them.

Well, that’s it for the Paris. Sheldon Solow doesn’t give a rat’s ass about New York. He just wants more money.

I will tell you a story about the Paris, from 1979. My friend Regina Weinreich, who writes for this site, and I went there to see a terrific Richard Pearce movie called “Heartland” starring Conchetta Farrell and Rip Torn. When the movie ended, no one was getting up to leave. It turns out that Jackie Onassis was there with her boyfriend, Maurice Tempelsman. For a bit, no one moved, then everyone stood. The room was paralyzed. Someone said out loud, to Jackie, “Why are you here?” They couldn’t believe it. Jackie, in her soft, whispery voice, replied, to the crowd: “I have to go to the movies, don’t I?” Everyone laughed, and clapped, and that was it. The audience filed out without bothering her.

Alas, Goodbye to the Paris. We are pretty much down to nothing now in the world’s greatest city. The Paris is gone, the Ziegfeld is gone.  The Baronet and the Coronet are gone. The Little Carnegie. The Thalia, the New Yorker. Some may recall The Sutton on East 57th St. I watched “Spinal Tap” on Greenwich Avenue and 12th St where now an Equinox stands. I’ve heard the theater on East 86th St. is gone– I saw “Ishtar” there. And what about the theater on Third Avenue and 71st St, where we had so many screenings? And of course, the Lincoln Plaza Cinemas are gone now for more than year at 62nd and Broadway.

Congratulations to all the greedy developers. You’ve done a fine job. You will be remembered by history for what you’ve demolished. We can all watch the movies on our phones, thanks to you.