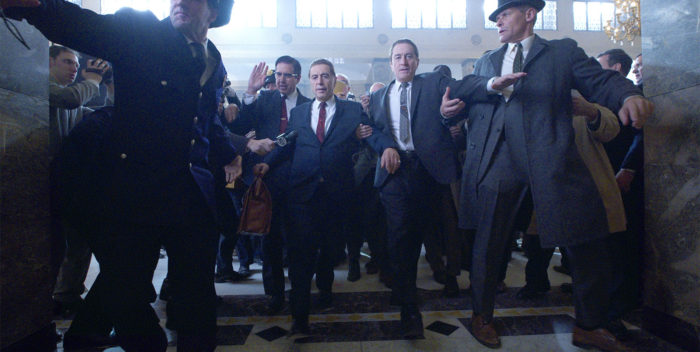 Netflix is looking to change the norms for movie releases once again.

The pay platform will release Martin Scorsese’s “The Irishman” into theaters on November 1 for just 27 days, or 3 1/2 weeks. Then it will arrive on our TV and computers.

This is Netflix’s main Oscar entry, and the hope for it to be a massive hit that scores multiple awards is carried by fans as well as executives. Reuniting Scorsese with Robert De Niro and Joe Pesci, adding Al Pacino and Bobby Cannavale, “The Irishman” is our last vestige of hope in a bleak world right now.

But Netflix is toying with the Motion Picture Academy and its members. Just as with “Roma,” the platform wants the Oscars but on its own terms. “Roma” won Best Foreign Film and not Best Picture last year because of it.

Seeing movies on a big screen makes a huge difference. I loved “Roma” when I saw it on the screen at the Walter Reade Theater. But later, “civilians” who watched it on Netflix told me they found it “boring.” How could that be? “Roma” is a great piece of art. But seeing it on a small screen diminished its importance, even if the screen was 70 inches. Being at home, with life’s interruptions, killed the experience.

So Netflix will have to deal with that problem this time around. But at least “The Irishman” is in English, is action packed (we hope), and has a well known, beloved cast. No one will find it “boring.” Theater owners may not be happy with their showcase window. Scorsese may not be either. But those first 27 days will create a clamor, that’s for sure!