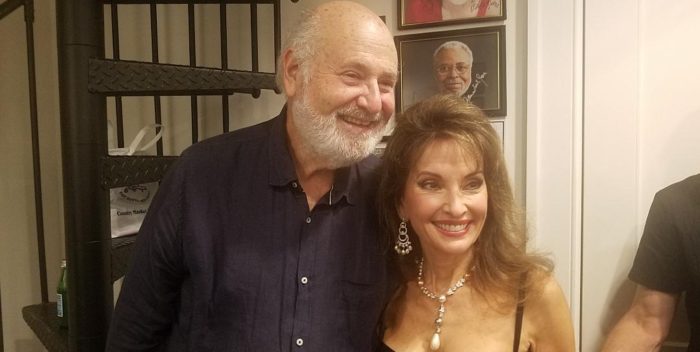 We certainly know the great Susan Lucci from her four decade run as the conniving, self centered Erica Kane on “All My Children.” After 18 nominations, she finally won an Emmy for her good work in 1999. In real, we also know that she’s a doll, lots of fun, very petite, and ageless (her 72 is worthy of an award).

But did we know she was funny? Hilarious, actually. Lucci was part of the ensemble last night for the annual Hamptons performance of “Celebrity Autobiography,” the popular off Broadway (and Broadway) show in which famous actors read portions of unintentionally humorous memoirs by “stars.” The show was created and developed by talented actor/writers (and married couple) Eugene Pack and Dayle Reyfel. They alone are worth the price of admission.

The Hamptons audience in fabled Guild Hall ate it up, including, among others, CNN chief Jeff Zucker, who brought his eldest son.

It’s a little like shooting fish in a barrel. The writers of those memoirs didn’t author books so much as issue products. With mostly vapid stories to tell– and even those in short supply– a lot of their recollections involve food they’ve eaten or will eat, or diets they’re on or have abandoned. Last night, the actors’ delivery of this information was particularly poignant, particularly Seacrest’s observation that “I can really go for a plate of penna pasta.”

The piece de resistance, though, is a four way retelling– or “Rashomon and on on” — of the Eddie Fisher/Debbie Reynolds/ Elizabeth Taylor affair from the early 60s that also included Richard Burton and Mike Todd. How that soap opera holds up 60 years later! It’s worth just to hear Lucci as predatory Liz and Reyfel as innocent Reynolds. Chris Bauer’s bewildered, drunk Richard Burton would make Mike Nichols howl with laughter.

Some of this gang will be at the Triad Theater this Monday– day after tomorrow– for another performance. And here’s a scoop: Gina Gershon and Jennifer Tilly, stars of the cult hit movie “Bound,” will reunite to play Ivana and Ivanka Trump. We don’t want to miss that!