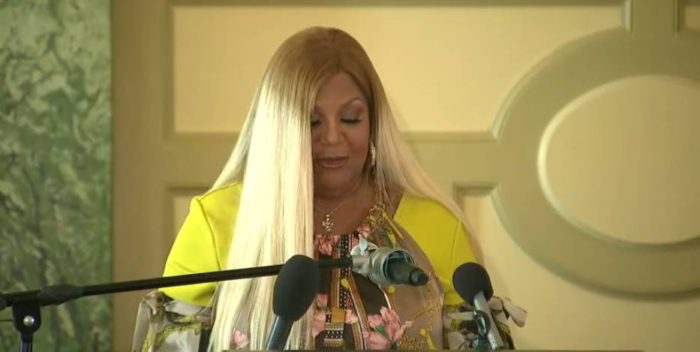 RESPONSE FROM MICHAEL JACKSON ESTATE
Raymone Bain is not authorized to act on behalf of the Michael Jackson Estate nor to use Michael Jackson’s name in any way for charitable or her own commercial purposes.

Raymone Bain will not give up. Her fifteen minutes of fame thanks to Michael Jackson ended a decade ago but that won’t stop her from trying to cash in on Michael.

Today she announced she’s starting a new “foundation” called “MJ Legacy.” Michael’s Estate will shut this down before dinner.

I feel bad for Raymone, even with her crazy new hairdo. (See video.) She sued the Estate, she exploited  her association with Michael, she keeps looking for a way back in.

You’ll see from the video that there are few people at her press conference. Please, Raymone, stop this. It’s funny, granted, but don’t we have bigger issues in this world?

OMG– she says “Michael Jackson has been a victim over and over again.” Yes– and she’s the victimizer! LOL! She must leave this man and his family alone.