Is Taylor Swift out of Vogue? And vogue?

As Swift plots the release of her new album, called “Lover,” for August 23rd, there have been disturbances in her atmosphere.

Most surprising is that since Taylor’s cover story for Vogue’s September issue dropped six days ago, the Vogue web traffic has fallen off a cliff. Alexa.com, which measures sites, offers a graph that should set off alarms at both Vogue and Taylor’s record company. The trouble started on August 5th, and hasn’t gone away. 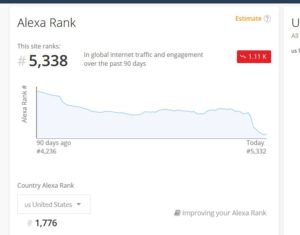 On top of that, Swift’s third pre-album release single, “The Archer,” which I thought was very cool, has been a no-show on the charts. Cool and sophisticated, the opposite of Taylor’s bubble-gummy hits, “The Archer” failed to hit a target. So far, “The Archer” has garnered only 33,000 in actual downloads. With streaming the total comes to 151,000, which isn’t much. “The Archer” hasn’t shown up on the Spotify streaming charts.

Luckily, Swift’s “You Better Calm Down,” has remained aloft on iTunes, staying in the top 10 most of the summer with a decent 200,000 paid downloads and a total of 1 million sales including streaming. On Friday, she releases the album’s title song, “Lover.”

Swift also failed to save the Teen Choice Awards on Fox this past Sunday from their lowest ratings ever. She’s set to appear next on the MTV Video Music Awards on August 26th, three days after the album’s release. Those ratings, plus the initial weekend sales for “Lover,” should tell us a lot about Taylor’s trajectory.