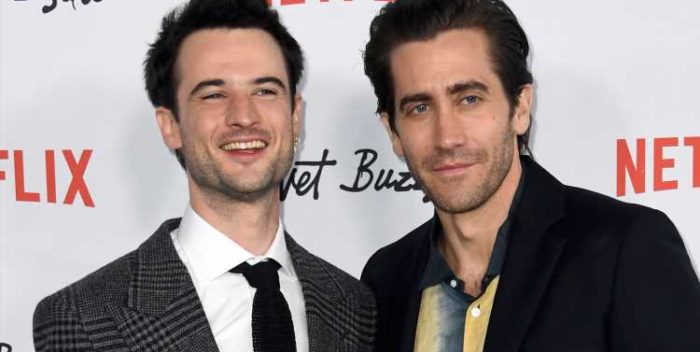 There were a lot, I do mean a lot, of women packed into the Hudson Theater tonight to see two guys tell stories on stage. Of course, the men were Jake Gyllenhaal and Tom Sturridge, each of whom has a following among the ladies. They are both, also, at the top of their current class of actors, ages 38 and 33, respectively, and the top of their game.

Everyone’s talking about Leonardo DiCaprio and Brad Pitt right now in “Once Upon a Time in Hollywood.” But once upon a time in New York, we’ve got our own pair of star actors doing the heavy lifting 8 shows a week.

The guys appear each in two monologues: Sturridge in Simon Stephens’s “Sea Wall,” and Gyllenhaal in Nick Payne’s  “A Life.” They’re good plays, but without heavily talented actors with drawing power they’d be just as well seen off Broadway. Recently, Carey Mulligan and Billy Crudup each had similar situations down at the Minetta Lane Theater. A little further back, Laurie Metcalf and also Judith Light had their monologues at the Lucille Lortel Theater.

“Sea Wall/A Life” had an acclaimed run at the Public Theater, so why not try it out uptown for a few weeks?  It turns out it was a good idea. The box office is better than booming, and when reviews hit on Thursday night, empty seats will be gobbled up.

The monologues are a good match– stories of young men dealing with death and life. Each one is a little predictable and slightly on the nose, but the delivery is so adept that the material is elevated. The actors are a good match, too. They each come from theater families. Sturridge’s father,. Charles, is an acclaimed British director. His mother, Phoebe Nicholls, is known to American audiences from “Brideshead Revisited” and “Downton Abbey” (she played the wife of annoying cousin Shrimpy).

So there’s a lot of energy bouncing around the stage at the Hudson, and a lot of confidence. Sturridge doesn’t have the film resume of Gyllenhaal but it’s coming if he wants it. Even in the 2013 Broadway production of “Orphans,” Sturridge owned the stage. He was just 27 then. He’s even better now, making the slight “Sea Wall” epic and poignant. There are also lighter moments before a terrible catastrophe occurs, and it’s nice to see Sturridge smile.

Gyllenhaal is doing something few of his movie counterparts will try– he performs on stage all the time. Before “A Life,” he was triumphant in “Sunday in the Park with George” in the same theater.  (It seems like he’s aiming for stage/movie career a la Henry Fonda.) He’s a STAR, he has real charisma and ease, and is never boring.

“A Life” juxtaposes life and death for its narrator, Abe, who’s becoming a father and losing one simultaneously. Because “A Life” is a little lighter than “Sea Wall,” Jake can run into the audience as part of the show, and say audibly to an audience member, “Sorry if I woke you up.” Breaking that fourth wall makes a nice connection to the audience, who already feel they know Abe.

By the time, “A Life” is over, we feel like we know both characters from both stories. Director Carrie Cracknell adds a little twist at the end, tying the two performances together, that’s very sweet and haunting. But the two monologues will forever be linked because of it.