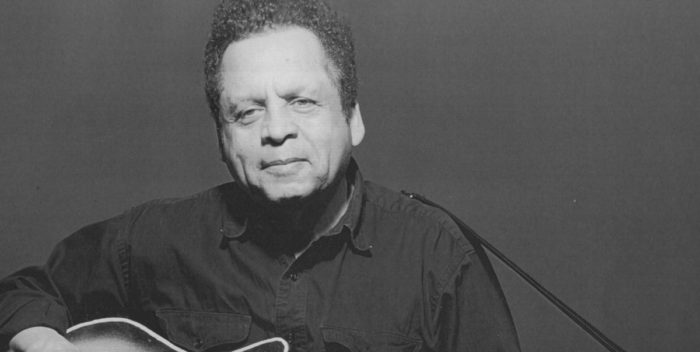 Garland Jeffreys was launched into the New York scene circa 1973 with a great album on Atlantic Records that no one bought and radio stations didn’t play. He was black, he was Puerto Rican, he rocked, he didn’t fit into the classic R&B world of the Spinners or Teddy Pendergrass. Who was he? He sang reggae, with stories that resembled Bob Dylan’s.

Four years later, thanks to Jerry Moss and Herb Alpert at A&M Records, Garland was back. This time, he surfed in on the new wave, with Elvis Costello, Joe Jackson, and Graham Parker and the Rumour. A reworked version of his ’73 hit “Wild in the Streets” now struck a chord on progressive FM radio. A series of albums followed, a solid fan base formed, and eventually he had a big hit with “Matador.”

Flash forward to Saturday night. Garland, who went to Syracuse University with late life long pal Lou Reed, decided to put four decades of dogged touring to rest. He was serenaded at City Winery in two shows, by the likes of David Johansen, Laurie Anderson, Willie Nile, Vernon Reid, and a half dozen lesser known but terrific performers. Garland’s 23 year old daughter, Savannah, performed one of his great songs, “I May Not Be Your Kind.” His Epic Records A&R man, Bill Freston, brought his brother Tom (a co-founder of MTV). (Garland and Bill got a hit out of a cover of “96 Tears” around 1982.) The two sold out shows were sing-a-longs. There was a lot of reminiscing.

Garland wore a white shirt, black pants, a beautiful colorful flowered suit selected by his devoted wife and manager, Claire. There were two birthday cakes– he also turned 76 on Saturday night– and lots of cupcakes for the audience.

There’s an irony in the retirement. A few years ago, in 2011, I sat with Garland in his living room in Stuyvesant Town, where he’s like the musical mayor, and listened to tracks for his first new album since 1997’s “Wildlife Dictionary” (released only in Europe, but essential). That new record became the first part of a trilogy detailing Jeffreys’ life in Coney Island, called “The King of In-between.” It was followed by “Truth Serum” and “14 Steps to Harlem.” They are qn unlikely Renaissance, his best work. As Laurie Anderson said on Saturday night before performing a heartbreakingly melancholy duet with him, “Garland makes albums as if he were writing books.”

Garland’s songs rock, they can beautifully crafted ballads, or mid tempo soul songs. He drapes the music around stories, which no one deos anymore. Bruce Springsteen loves him so much he included him in his famous Asbury Park Christmas shows from the early 2000s. Garland issued his own cover of “Streets of Philadelphia” as a tribute to Bruce. Steve van Zandt and wife Maureen have often been guests at his shows. This is because Jeffreys can push a political idea into a song with a hook and add just enough sweetness that you don’t even realize it until you’re humming along. Who else could get a room of white people to sing along to “Don’t Call Me Buckwheat”?

At 76, Garland can still sing his trenchant come back song “I’m Alive.” He is, and he’s finally off the road. Saturday’s shows comprised an outpouring of love and admiration for a real musician who has touched so many lives. He has no Grammy Award. He’s not in the Rock and Roll Hall of Fame. But his body of work is worth more than all that. It’s a treasure chest.