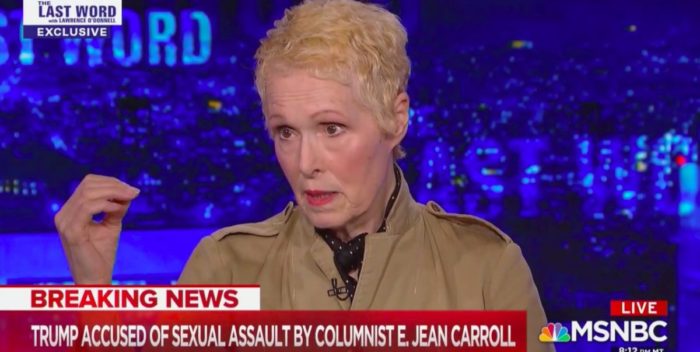 I wish I could say that sales for E. Jean Carroll’s “What Do We Need Men For?” have skyrocketed since Friday when news of the book and its revelations broke wide.

But the book is sitting at number 473 on Amazon right now after a brief spike to number 110 on Friday.

That was when New York Magazine’s startling cover story in which Carroll accused President Donald Trump of raping her in the mid 90s hit the stands.

The excerpt from the book also contained accusations about former CBS chief Les Moonves and other bold faced men. Carroll, who’s written a monthly column for Elle Magazine since 1993 and once had a popular show on CNBC’s precursor, America’s Talking, said she and Trump went into a dressing room at Bergdorf Goodman, and he attacker her. Trump denied even knowing her, but New York ran a photo of the president, first wife Ivana, Carroll, and her then husband all together from 1987.

Despite Carroll’s credentials, some found her story unbelievable. And even though the New York Times confirmed with her sources that she’d confided in them after the alleged episode, the paper didn’t give the story much emphasis. In fact, they put the report in their Books section and didn’t feature it prominently on their website’s front page.

I want to believe Carroll. I tried to confirm her story with someone who knew her well from that time. But I was turned down cold by the person, whose name I’m omitting. They simply declined to comment, and didn’t sound happy about the whole thing.

I did think “What Do We Need Men For?” would soar on amazon Friday night. This morning Carroll is making the TV rounds, and even that isn’t helping. Either people don’t believe her story or don’t care. Either choice is fairly disturbing.