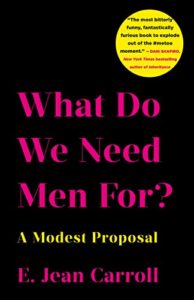 E. Jean Carroll, who writes for Elle Magazine and used to have a terrific cable TV show, has accused Donald Trump of raping her circa 1995-96. The accusation comes in an excerpt from her forthcoming memoir that’s on the cover of New York Magazine.

Trump has denied the whole thing, of course, and says he doesn’t know who Carroll is. But the New York excerpt contains a photo of Trump, then wife Ivana, Carroll, and her then husband John Johnson from 1987.

Meantime, Carroll says she told two friends when the rape happened. The New York Times called those friends, each in the media, who re-confirmed Carroll’s account.

The idea that Trump wouldn’t know Carroll from the mid 80s to the mid 90s at least is absurd. I knew both of them, they knew each other at least on the celebrity circuit. Trump was also aware of anyone who was on TV, especially a smart, beautiful blonde. His protestation is ridiculous.

Carroll’s memoir, “What Do We Need Men For? A Modest Proposal” comes out July 2nd. It’s been thoroughly vetted by her esteemed publisher, St. Martin’s Press. She tells tales of being hit on, sexually harassed, worse by many New York men including former CBS chief Les Moonves.

None of this is surprising. As I read the excerpt I thought of many women her age from the media who had soaring careers until they didn’t, all of whom likely have similar tales to tell.  Since #MeToo started, I’ve had countless women I thought I knew tell me horrifying stories of sexual misconduct foisted on them by “guys” I thought I “knew” and admired. You know they are not lying. They are telling you stuff you can’t believe, but you must.

It’s unclear what impact E. Jean’s memoir is going to have. Will anyone in Trump’s base be swayed by her story? Probably not. I’m starting to wonder if one of the bases’s daughters or sisters came home with such an account if their menfolk wouldn’t be proud that Donald Trump had attacked them. That’s how bad things have gotten.

So far, “Modest Proposal” has hit number 110 this morning on amazon. It will be interesting to see where it goes from here.