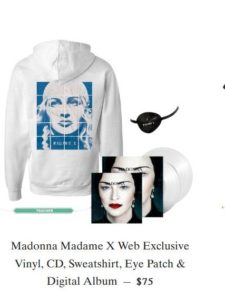 Madonna is doubling down on “Madame X.”

The CD isn’t selling except for being included in ticket bundles. That’s to be discussed tomorrow.

The NY Post says her show tickets aren’t selling well (although they’ll pick up closer to the dates).

So now what? Madonna just announced a Pop Up store for Madame X merchandise on West 15th St. near the West Side Highway. I’m hoping they don’t sell out of eye patches. Maybe they’ll give a CD with every purchase, and get the RIAA to count those as sales, too!