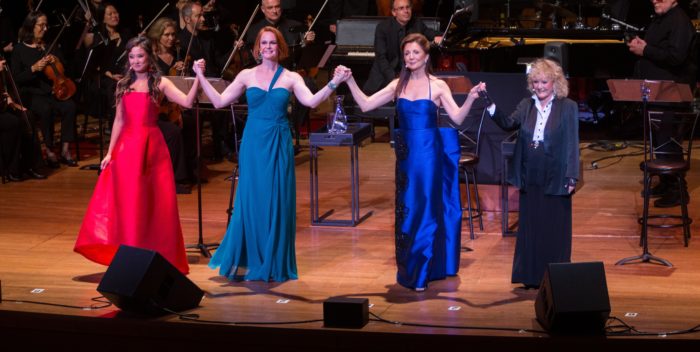 Lincoln Center tributes are always interesting, and even a little weird. What can you do? The main thing is, last night they raised $2 million with an American Songbook tribute to Broadway’s greatest living genius, Stephen Sondheim.

At Alice Tully Hall, legendary “Downtown” singer Petula Clark — for reasons not terribly clear– led a group of three Broadway stars including Donna Murphy, Kate Baldwin, and newcomer Ashley Park— through a series of Sondheim songs (not always hits). The program was directed by Lonnie Price and the orchestra was led by Paul Gemignani, Sondheim’s personal conductor for 22 shows.

The whole thing was the brainchild of media mavens IAC chieftain Barry Diller and Bryan Lourd of CAA. They were there with their life partners, respectively, Diane von Furstenberg and Bruce Bozzi. By the looks of the red carpet photos supplied, Richard Kind was there and so was Diane Sawyer. (I didn’t see them. They must have been forced to sit up front.)

I did see Clive Davis, as well Arne and Millie Glimcher of the Pace Gallery, and the ubiquitous Andy Cohen. The great theater producer Roy Furman was on hand, also.  I also saw Michael Bloomberg, who used to be mayor, chatting with Jane Rosenthal and Zac Posen at the pre-show cocktails.

I would listen to Donna Murphy sing the phone book, so I was happy as a clam. Baldwin and Park were delightful, as well. The songs were meant to be all about women, so the choices were eclectic and stayed away from hits, per se with the exception of “Not a Day Goes By” (which you should look up Carly Simon‘s version) and “I’m Still Here” (see Elaine Stritch). No attempted “Send in the Clowns” or “Ladies Who Lunch,” maybe because they wanted to try some new things. The final number, “Pretty Women,” with all the ladies was tremendous. The songs included: “The Miller’s Son,” “Take Me to the World,” “I’m Still Here,” “You Could Drive a Person Crazy,” “Another Hundred People,” “Not A Day Goes By,” “Every Day a Little Death,” “So Many People,” “Getting Married Today,” Some People,” “Anyone Can Whistle,” “Pretty Women,” and “Liaisons.”

Petula served as kind of a moderator in a scripted fuss among the women, very funny. Her big moment was knocking out “I’m Still Here” from “Follies.” She should really have  a Kennedy Center honor. (But then again, so should Dionne Warwick.)

There’s nothing better than listening to live music, particularly Sondheim, and Lincoln Center is one of the gems of New York. It was kind of hilarious, though, when the new chief, Henry Timms, a Brit, thanked the audience at the end and then instructed the ones who were going to a fancy dinner, in the lobby, to stay to the left while all the others “should go to the right.” He was met with a gasp of laughter. But this is always the case at Lincoln Center events. They’re not famous for class subtlety.

So we went to dinner at Fiorello’s across the street, where I ran into an old friend: Judge Andrew Napolitano of Fox News. I worked with him for a decade, and he’s just a great guy, fiercely independent, and a speaker of the truth. Roger Ailes loved him, it was one thing we had in common. Fox News would do well to feature him as much as possible! (And PS Joe Torre was sitting in the back!)