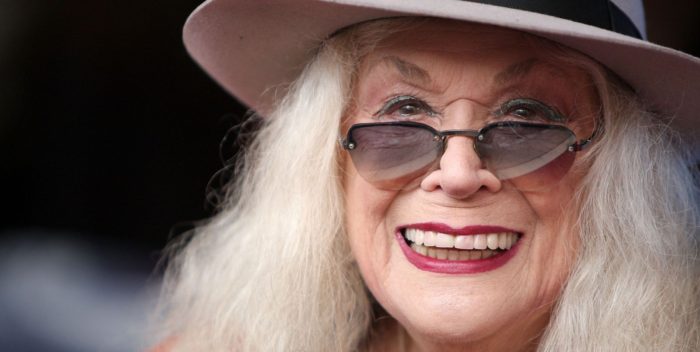 A big light went out in New York on Wednesday. Sylvia Miles– twice an Oscar nominee, a woman to be reckoned with — died at age 94.

Sylvia was just about the New Yorkiest New Yorker you could meet in the entertainment  business. She was fiercely independent, didn’t take no for answer, and was radiant in her confidence.

Her two Oscar nominations were for “Midnight Cowboy” and “Farewell My Lovely,” both in the supporting actress category. She was also known and loved in her later years for roles in “Crossing Delancey,” “Wall Street,” and its sequel, “Wall Street: Money Never Sleeps.”

She was terrific as well in TV roles in “Sex and the City,” “One Life to Live,” and “All My Children.” Her career began in television, in fact, and she played the part of Sally Rogers in the pilot for “The Dick van Dyke Show.” (The role was played in the series by Rose Marie.)

Sylvia was also part of the Andy Warhol crowd. She was a regular at the Factory (the building that was the clubhouse for all of Andy’s pals). She was there at Studio 54, and anywhere there was action, i.e. life. The New York in crowd was her family, and she loved them.

Sylvia was never an ingenue, but she was a siren, and she knew how to get attention. In later years, as she became lovingly eccentric, she wanted to be on the front lines of New York night life. And she was. Accompanied by her many close friends, Sylvia didn’t like to miss a premiere, an opening, a dinner party. She was welcome at all of them. More than anyone ever in the history of New York nightlife, she epitomized the opening lines of “Cabaret”: What good is sitting alone in your room/Come hear the music play,

Sylvia has a 99 year old sister, and a niece in Berlin, I am told by her good friend, Regina Weinreich. (Regina will give us a remembrance later today.) But she also had an extraordinary circle of friends who took care of her at her Central Park South apartment, all of whom loved her very much. Condolences to all of them, especially Geraldine Smith, who was Sylvia’s “date” at so many events and her great, great pal.