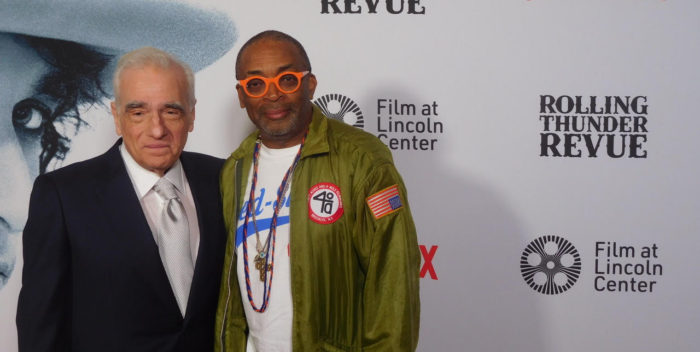 Martin Scorsese captures the spirit of everything that’s great about Dylan in his phenomenal documentary, “Rolling Thunder Revue.” The Netflix film premiered Monday evening at Alice Tully Hall, and the director was on the red carpet in a good mood talking to journalists about the rambling carnival of a concert tour Dylan launched in the fall of 1975 in small venues for the love of performance and not the money.

Describing Dylan’s artistry, Scorsese told a reporter on the red carpet, “The power of the lyrics and the elasticity of the performance are something. And the look on his face and his eyes.” First there are the words enthused Scorsese. “He shapes the words, like a sculptor or a painter. Fantastic!”

He added, “They touch us. And also, every time he sings it’s slightly different. The phrasing of something, the intonation, his own voice, the pitch, I don’t know, it’s always new. We don’t know what rhythm it’s going to be in, you know?”

The best part of the documentary are the interviews with the legend himself.

“He was just outrageous,” Scorsese told me. “He denies everything. It’s again Dylan the provocateur and also the sense of humor that he has. And he does it so wonderfully I think, the deadpan humor.”

I asked Scorsese if he have a favorite moment in the interview?

“I like him talking about all these people wanting to sing songs with him and he says, ‘I don’t see the point of it.’ But it’s your tour, but you put them all on the tour (someone told him). They want to sing with you. ‘I don’t see the point of it.’ And that other thing too in the beginning — and I don’t want to give it away — when he says, ‘Oh, Bullshit.’ He disrupts the interview itself, which is fascinating.”

Here’s Dylan’s description of the Rolling Thunder Revue at the opening of the film:

Then Dylan pauses, “(What) klutzy bullshit…I’m trying to get to the core of what this Rolling Thunder thing is all about. And I don’t have a clue. Because it’s about nothing. It’s just something that happened 40 years ago. That’s the truth of it…I don’t remember a thing about Rolling Thunder. It happened so long ago I wasn’t even born. So what do you want to know?”

During one interview, Dylan says of Allen Ginsberg, who was on the tour reciting his poetry: “He was an incredible dancer, his steps were so unusual and exciting.”

Then there’s a clip of Ginsberg dancing but he’s awful, jerky movements, jumps up and down like a demented rabbit.

“Yeah, yeah,” Scorsese told me, recounting some of his favorite moments. “Ginsberg wanted to be a great dancer and he also wanted to be a singer. He thought he was great. And also Ramblin’ Jack (Elliott.) He had Ramblin’ Jack on a boat.’ (His) Singing he wasn’t so happy with, but the boat, okay,’ You know, he was a great sailor.”

Asked by a reporter on the red carpet how Dylan’s myth shifted from the first documentary he made in 2005, “No Direction Home,” Scorsese said, “I think it’s jelling on the same trajectory in a way, redefining himself, recreating himself, to find another facet of the artist.”

He added, “When you say the word artist everybody feels, oh, it’s pretentious. That’s what he is! He’s a great artist. So he’s gonna, Let me try this. Let me go here. Let me do this. Where do you get the inspiration from? Can you still write at the age of 77?’ Not necessarily the way you wrote at 21 because you’re a different person. Can you still write? Can you still perform? You have to pull it from somewhere. It doesn’t come out of the air.”

Asked how this related to his own life, Scorsese dodged.

So has Dylan seen the documentary I asked?

“I don’t think he’d seen any of it.” Scorsese started walking away, “I’m going to find out and I’ll get back to you.”

I had some loopy, fun moments with Ronee Blakely, who’s in the film. She was a back up singer in the memorable group scenes.

Commenting it was good to see her at the premiere, told me, “I came into town on Highway 61 in the pouring rain, and it was a hard rain that was gonna fall.”

How do you feel being at the premiere I asked?

“I feel just like a woman,” she told me.

“And I do know how it feels to live in a land where justice is just a game,” she replied.

Fran Lebowitz, the subject of another Scorsese documentary, was also on the red carpet.
I told her I was surprised what a sense of humor Bob Dylan has gotten late in life.

I told her there’s a hilarious scene in the film of Allen Ginsberg dancing, badly.