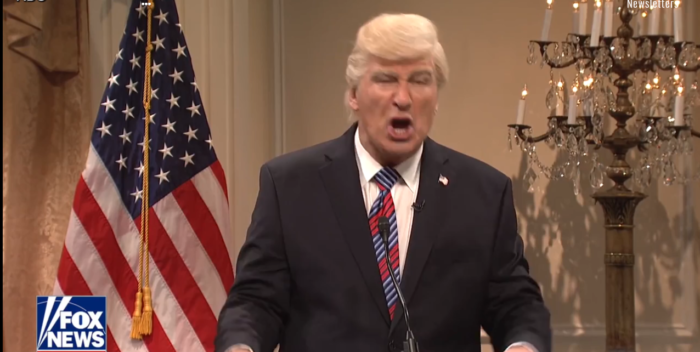 If it’s spring there’s jasmine in the air and Alec Baldwin is pretending he’s not coming back to “Saturday Night Live” as Donald Trump.

This is annual song Baldwin sings. He starts in April, puffs up in June, and by September he’s there in the cold opening.

This week he said during an interview for a movie called “Framing DeLorean,” which no one will see, that he’s had it, his kids want him home, and that “this fall I’m working like I never have before.”

As far as I can tell, Baldwin’s only project this fall is the live TV version of Aaron Sorkin’s play, ” A Few Good Men.” He’s taking the Jack Nicholson role, so he’ll get to say, “You can’t handle the truth.”

Well, yes we can. A year ago Baldwin said it was “agony” to play Trump on “SNL.”

The year before, he had so many commitments he knew he’d have cut back.

But it’s just Alec trying to get a raise from NBC. And in the season of the run-up to the Democratic debates and primaries, with Trump acting crazy all the time in real life, Baldwin will be back. He gets maximum exposure from the gig. It’s not like he has travel far– from the East Village to Rockefeller Center. He meets other stars, which is fun. He gets out of a house of sleeping children. It’s really the perfect job.

He also has an Emmy Award for his work.

Actors do this all the time. Remember when Daniel Craig said he’d slit his wrists if he had to play James Bond again? Yeah. That was before he got his $50 million paycheck.

Alec Trump will be back. You can bet on it.