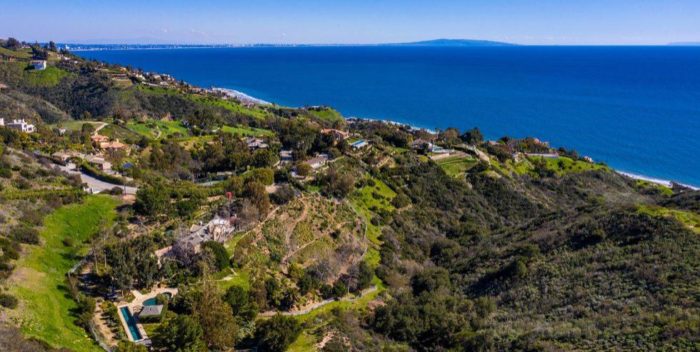 Two years ago, Mel Gibson put his let’s say unique Malibu estate on the market for $17 million. Maybe it was the juju around Mel, but no one wanted the 5.5 acre spread with an eccentric group of buildings with a 6,758 sq. foot main house.

Now you can have it for $14.5 million, in a fire sale. You do get five bedrooms with five baths, a guest house, and an apartment over the three car garage. If you’re thinking of jettisoning your original family and shacking up with a girl half your age, this is the place for you!

Mel’s been trying to sell this place for two years, as well as his land in Costa Rica and other places. One reason might be that his film career is in the toilet. His last movie, “Dragged Across Concrete,” played in one or two theaters and went straight to video. Basically, no one’s seen it.

If you buy Mel’s ranch, you’re not far from his church, Holy Name, where he’s parked $70 million in a not for profit foundation. The church goers do not believe in the Pope or the Arch Diocese (which doesn’t recognize it as a Catholic Church.) They are Holocaust deniers and hold Jews accountable for killing Christ. I don’t know when they play bingo, but I’m not going!

The church was built by Mel for his dad, the lovely Hutton Gibson, now unbelievably 100 years old. Hutton also doesn’t believe in the Pope or mainstream Catholicism, is a Holocaust denier and loved by neo-Nazis. It’s unclear if he comes with the house.