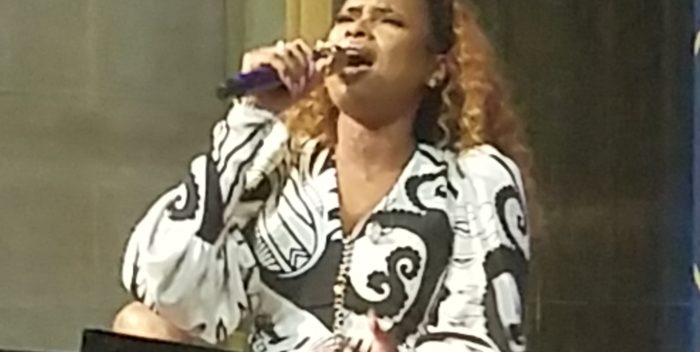 Jennifer Hudson– this is who she is. She drove 14 hours last night from Chicago to New York so she could sing for Aretha Franklin at the Pulitzer Prize ceremony this afternoon.

JHud literally peeled the paint off the walls with a stunning version of “Amazing Grace.” She told me afterwards: “What could I do? They cancelled all the flights. I said, We have to get there, Let’s go!”

Jennifer and her team piled into an SUV and said, “Driver, New York, please!” It was well worth the trip.

She sang in front of all the 2019 Pulitzer winners including fiction winner Richard Powers (“The Overstory”), and all the journalists who’d either investigated Donald Trump last year or reported on mass shootings. Also present were the two Reuters reporters detained in Myanmar for over 500 days.

There were also staff members from the school newspaper at Parkland, Florida’s Marjorie Stoneman High School. They had to write their friends’ obituaries.

Dana Canedy, who has single-handedly revolutionized the Pulitzers in two years, pulled together an afternoon at Columbia University that celebrated courage and freedom of the press, as well as significant achievements in the arts.

Aretha’s award was accepted by Clive Davis, and Aretha’s publicist, Gwendolyn Quinn. The Aretha guests included yours truly, two of her cousins from Washington, DC, famed songwriter Valerie Simpson, and a panoply of the Queen of Soul’s friends. She would have been very proud.