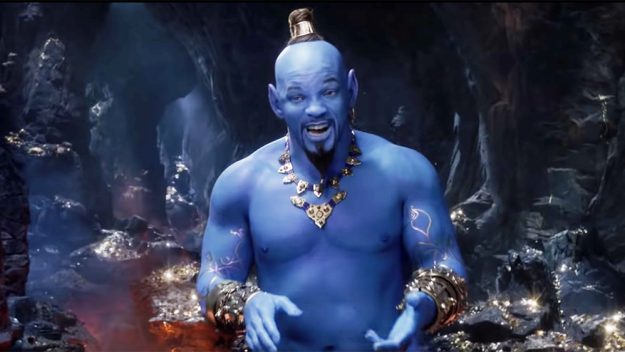 FRIDAY NIGHT LIGHTS: Will Smith turned blue for “Aladdin,” a movie few like with just a 58 on Rotten Tomatoes. What I heard was “it’s not as bad as Dumbo.” Disney is sure lucky it has Marvel since these two animation-to-live ideas are not working out so far.

“Aladdin” made $7 million on Thursday in previews. The total for Friday including previews is $31 million, more than anyone hoped or predicted. An $80 mil three weekend will be most welcome. Saturday and Sunday should be BIG for kids. So hold on. “Aladdin” may have the needed magic.

It doesn’t hurt that “Aladdin” opened on almost 5,000 screens– third widest release ever.

Olivia Wilde’s “Booksmart” needed some street smarts this weekend. Last night, the well reviewed–97%– comedy crashed and burned with just $2.5 million. Boxofficemojo had predicted at least $9 million for the three day weekend. Now it looks like $7.5 million is the goal. It’s too bad for Annapurna Pictures, which suffers from bad marketing and PR. I’m not the only press person who was never invited to a screening, and certainly not the NY tastemaker premiere this past Tuesday. Annapurna is a company with great taste and no common sense. They’re in some alliance now with the revived United Artists, which should make Barbara Broccoli nervous about next year’s James Bond movie (not that she isn’t nervous already).  PS, you know, it’s not funny. We want these quality movies to do well at the box office.

UPDATE: “Booksmart” made only $6.5 mil for the three day weekend.