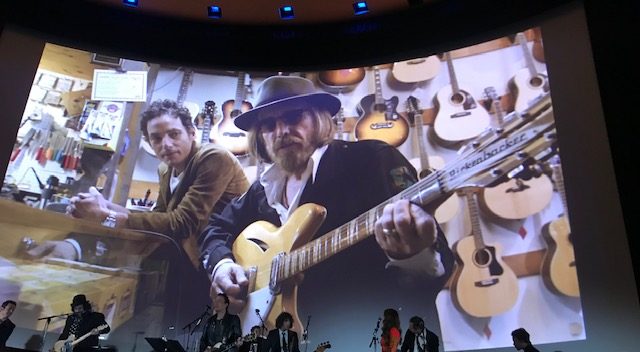 “Echo in the Canyon,” about the music that came out of 60’s music mecca Laurel Canyon,  reverberated through Hollywood last night at the film’s premiere.  The film is the brainchild of Jakob Dylan and his longtime manager Andrew Slater, who is the film’s director.  An homage to influence that the music, The Beach Boys, Buffalo Springfield, The Byrds, The Mamas and The Papas, Michelle Phillips is candid and delightful in the film about the free love that went on at the time, and more were all in the same  creative and physical place.

Ringo Starr, Stephen Stills, Roger McGuinn and music industry folks came out but the person who wasn’t there and who looms large in the film, the film is dedicated to him, is Tom Petty.  Stories of the “kindness and the generosity” of the time  as Slater called in at the Q and A, and the influence they had on each other as well as the Beatles and more, are told is this truly terrific doc.

Dylan spoke with as well as Petty, with Brian Wilson, Lou Adler, Eric Clapton, Ringo Starr, Graham Nash and more .  After the Q and A  Jakob and guests sang eight songs, including Stephen Stills singing  “Questions”  Roger McGuinn, and a wonderful Cat Power sang the Association’s “Never My Love” with Dylan.  The film opens today, see it.  It’s a rock music experience that is singular and not to be missed.