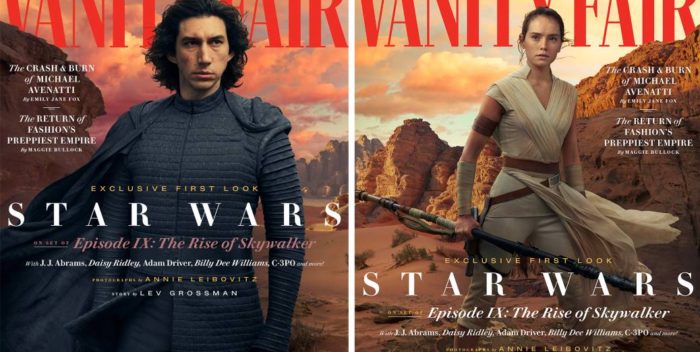 Vanity Fair has been struggling with circulation problems in print and online. So now they’re offering two exclusive photos as covers from the new “Star Wars” movies to boost interest.

This is really playing the Graydon Carter card. For over a year, VF has eschewed Carter’s successful methods and had mostly difficult covers that were poorly shot of people not so popular and not looking great.

But the “Star Wars” covers– a Carter traditional exclusive– show that editor Radhika Jones is a little bit in retreat. Her template has been to offer covers of diversity. But those didn’t sell well. Last month, Jones returned to old standby Nicole Kidman, even though our favorite actress didn’t have a big movie to sell. But she signaled a pause in Jones’s radical makeover of the magazine.

The “Star Wars” covers are notable in that they are a choice of either Adam Driver or Daisy Ridley. There’s no John Boyega, Oscar Isaac, or especially Billy Dee Williams. Driver and Ridley are young and white, the demo Conde Nast and VF used to hold to their hearts dearly. Diversity be damned, even though that’s what “Star Wars” is about. Well, let’s see if that works.

The magazine has just endured a traumatizing Cannes pool party in drenching rain at the Hotel duCap. Even though Brad Pitt and Leonardo DiCaprio were on the grounds, they didn’t attend. Their big get was Quentin Tarantino, and a bunch of actors who’d already been at every party in town. The rain was so bad the guests couldn’t go outside, so the party remained under the eaves of the Eden Roc, a small space that’s hard to keep heated.