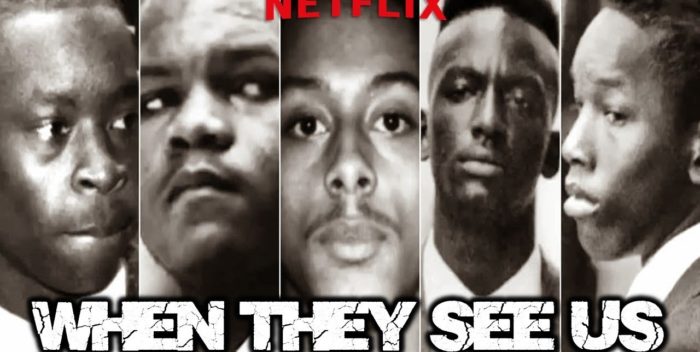 Oprah was in the house. So was Rev. Al Sharpton. Before the red carpet showing at Harlem’s Apollo Theater, there was mayhem as scores of people turned up wanting tickets.

Duvernay, director of “Selma” and “A Wrinkle in Time,” has become an overnight star herself. She has a devoted following also from her documentary, “13th.”

The director made a few introductory comments, we met the cast– including Michael K. Williams and Vera Farmiga. And then the show rolled.

In New York, the case of the five teenagers railroaded into confessing to the rape of the Central Park Jogger became front page tabloid news in 1989. This was the case that created the term ‘Wilding.’ Even when the teens went on trial and denied the rape, and no evidence was actually found tying them to it, a jury found them guilty. The boys served six to 14 years before the actual rapist confessed, and the boys were released. A jury awarded them $41 million in damages after they sued the city. It wasn’t enough.

But back then, one man was certain the boys — who were between 14 and 16– were guilty without a trial was Donald Trump. He took out an infamous full page ad in the New York Times for $185,000 demanding they be put to death. He gave endless interviews saying the same thing.

When those clips, and the story of the ad, appeared on the Apollo screen last night, the entire audience booed, hissed, and jeered. The sound was deafening. And it happened twice. If Donald Trump thinks he’s popular with black people, he is really in Denial with a capital D.

“When They See Us” hits Netflix on May 31st. Last night we saw the first two parts. I’m hopeful Netflix will send me a link to the concluding two parts. I will say that at the end of the first hours, people were in tears. It’s an absolutely frightening story of racism and police corruption that must not be forgotten. Every single rule was broken to force those 5 boys into convictions. You wouldn’t think it was possible in the USA, and particularly in “sophisticated” Manhattan.

Farmiga, Williams, Aunjunue Ellis, and Niecy Nash are among the cast who give stellar performances. Blair Underwood — always underrated– blossoms in a court scene. The story also heavily rests on the misguided zealotry of then famed Sex Crimes Unit chief Linda Fairstein. She’s played by Felicity Huffman, who does herself no favors considering her current real life situation. Fairstein really comes off as the Villain of all time. Huffman plays it that way, too. Let’s pray this isn’t the last time we see her on screen. (PS The Apollo audience  didn’t seem to know who she was at all.)

When I see Part 2, I’ll write more. In the meantime, this is appointment-TV.