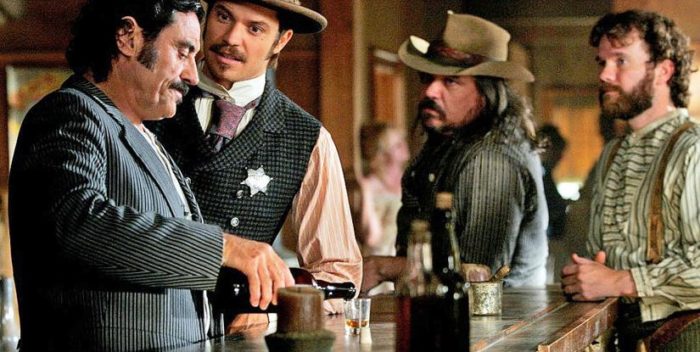 HBO’s “Deadwood” the movie premiered at the Arclight in Hollywood last night. Good thing because fans have been clamoring for a movie after the show ended without a solid resolution 13 years ago. Based on David Milch’s lauded Emmy winning series which debuted 15 years ago, the show reunites the characters of this gritty South Dakota town with their grudges, grievances and romantic crushes. You never have had to watch one episode as the excellent flashbacks expertly explain each backstory.

Directed by Daniel Minahan and written by Milch, luckily all the terrific actors from the series have come back; including a scene chewing Ian McShane, a never better Timothy Olyphant as well as Molly Parker, Robin Weigert, Anna Gunn and Paula Malcolmson, all just wonderful. Add to that John Hawkes and a power hungry Gerald McRaney, well the cast are all A plus. This foul mouthed, gritty whiskey drinking, clever and funny bunch of characters, many you love and many you love to hate are a treat to watch.

HBO’s Len Amato introduced the night and said of the original series that “it was 36 glorious episodes that changed the game forever. David Milch gives the outsiders a voice. In his universe dignity belongs to all. David’s world is a true fucking democracy.” Milch just revealed that he was diagnosed with Alzheimer’s Disease. He told the crowd after a lengthy standing ovation: “if you possibly can avoid it, try not to get old.” Milch then went on to thank “all whose Herculean efforts made this happen. I’ve been asked about doing this for so many years.”

He continued:”Being here with you all again reminds me of the transformative power of our work. Coming together to create something that reflects the fullness of life in all its beginnings and endings, sorrows and joys and it is the greatest affirmation of hope and purpose that I could ask for.”

After the film the crowd went across the street where the party was a small scale version of Deadwood, with a saloon, casino and a jail cell photo booth. The cast was thrilled to see each other as the crowd was appreciative to see this film which will be sure to garner awards during the upcoming season. The farewell of Milch’s Shakespearean “Deadwood” is poignant and masterful. One more triumph for the crème de la crème which is HBO.