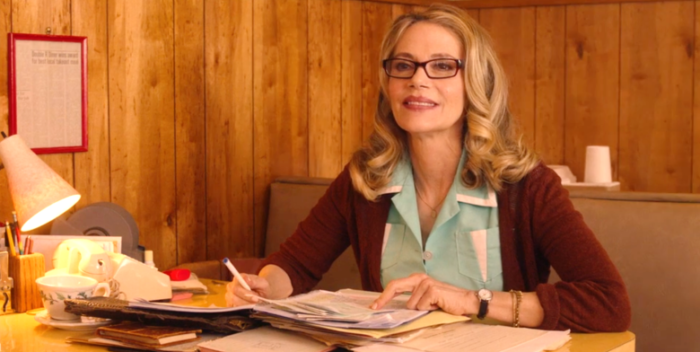 Peggy Lipton was a nice Jewish girl who went to Hollywood and made good, as they say. Her death yesterday at age 72 is all the sadder because everyone who knew her loved “The Mod Squad” star immensely, starting with her ex husband Quincy Jones. They had two daughters, Rashida and Kidada Jones, who each went on to successes.

I wrote about a lunch I had with Peggy in September 2002 on one her rare trips to New York. She was looking for projects– this was after her famous run on TV in David Lynch’s “Twin Peaks.” As usual, her sweet disposition shone through, but she was wanted to be edgier. Lorraine Bracco was going into “The Graduate” on Broadway as Mrs. Robinson. Peggy declared: “I want to do The Graduate!hen Lorraine Bracco’s finished, I’m up for it.”

She stayed in New York that fall, and had a five week run in a two-hander at the Flea Theater. She was so happy to be in New York, which was ironic because she’d always wanted to leave the East Coast when she was a teenager.

“I hated Long Island and I had to get out,” she told me. So she became a Ford model at 17, and between classes went on go-sees. She also studied acting. When she started getting work, her parents picked the family up and moved to the west coast. (Her brother, Robert, was a well-known soap actor on “As the World Turns” for years.)

She made a lot of movies and appeared in a lot of TV shows after that. But the former never really worked out. She told me: “I’ve been in some terrible movies. I ran into Neal Patrick Harris recently. We were in something called The Purple People Eater about twelve years ago. He was maybe ten, but he still remembered it as the worst experience of his life!”

She married Quincy Jones in her parents’ Los Angeles apartment and never looked back. They remained friends after their divorce (they were married for 15 years). When David Lynch and Mark Frost revived “Twin Peaks” a few years ago, it was Peggy’s character of Norma Jennings, who ran the diner, who the creators used to anchor the show. Fans were delighted to see her again.

But we’ll never forget Peggy as Julie Barnes, the cool chick from “The Mod Squad,” just 22 years old and holding her own with Michael Cole and Clarence Williams III, pretty much the only girl in the show and in action role, not a sitcom romcom. In 1968, she was very much a first crush for a lot of little boys and grown men.

Condolences to Peggy’s family and friends. She will be sorely missed and never forgotten.