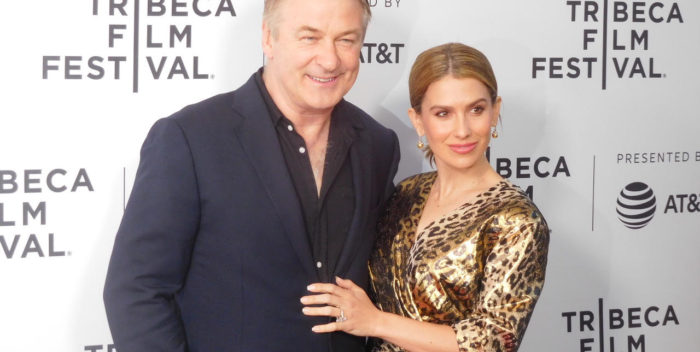 Nowadays people associate the DeLorean with the sci-fi travel device in the 1985 film “Back to the Future,” which was originally going to be a refrigerator according to the film’s writer Bob Gale, who’s interviewed in “Framing John DeLorean,” a terrific film directed by Sheena M. Joyce and Don Argott (“The Art of the Steal”) that screened at the Tribeca Film Festival. (Alec Baldwin stars as DeLorean.)

A fleet of DeLorean sports cars pulled up in front of the SVA Theater Tuesday at the film’s premiere and momentarily took the spotlight away from Baldwin and his gorgeous wife Hilaria.

“Framing DeLorean” is a mixed bag; it’s part documentary and part narrative with Baldwin featured in reenactments of scenes from the car designer’s life. Even more curious isI behind-the-scenes footage of the actor donning prosthetics and wig to get into character, all the while speculating on the car designer’s life, behavior and motivations.

There’s money, power, politics, drugs, scandal, sex, fast cars and all the elements of an action-packed film. But up to now all attempts to capture the man’s life on film have failed. The film manages to pull together all the surrealistic aspects of the man’s life in a cinematic language that works.

As the film reveals, DeLorean was unrepentant to the end, even after a drug bust and accusations of defrauding investors. And various plastic surgeries, including a bad chin implant, left him expressionless. DeLorean’s still a cipher but “Framing John DeLorean” directors Joyce and Argott, a couple in real life, have done a terrific job of capturing the genius but loony nature of their subject’s life and leaving final judgment to the audience.

Audiences, especially those old enough to remember the DeLorean trial, will notice that his ex-wife, Cristina Ferrare, a top model at the time and played by Morena Baccarin in the film, is not interviewed in the movie. She left DeLorean the day after he was acquitted of cocaine trafficking.

DeLorean historian Tamir Ardon told me at the press conference earlier in the day that Ferrare didn’t want to participate in the film. “I have known her for 15 years now, and I have spoken with her privately about things, and she just was not interested in that part of the movie. Luckily we were able to capture the essence through a lot of wonderful archival and obviously her kids had input.”

DeLorean’s children, Zachary, who was adopted, and Kathryn, are interviewed in the film and are still emotionally scarred by their late father’s notoriety. (DeLorean died in 2005.) What’s shocking is the abject poverty in which Zachary lives, as the movie reveals the hovel in which he resides that contrasts so dramatically with the luxury in which he and his sister were brought up and which is shown in archival footage.

In the end, Ardon thinks the car designer was a genius and admires much about him. “Thirty-five years later there are DeLoreans on the road with over 800,000 miles on them,” he told me. The film reveals the technical glitches of the early cars, manufactured in North Ireland by workers with no experience in car production. He says this is overdone..

“The quality of the cars, when they first came to the states, you have to remember that it is a brand new car company. The brand new work force. Assembling cars for the first time you are always going to be have problems,” he told me. “Even established car makers today have problems with cars when they first come out. By the time they got into a year two of production, they had actually worked out a lot of the issues, like the doors issues, they installed new striker pins, making sure that people were not getting stuck in the cars.”

As for the film’s title, it’s intentionally a tongue-in-cheek play on words said director Don Argott on the red carpet.

”It’s kind of how we portray people, how we frame them. And because this is a film that because it’s so unique in its approach, we felt like it also needed a clever title to help audiences understand what we were trying to do because, right out of the gate, it’s Alec Baldwin in a make up trailer? What the fuck is this?  I don’t understand what’s going on here?”