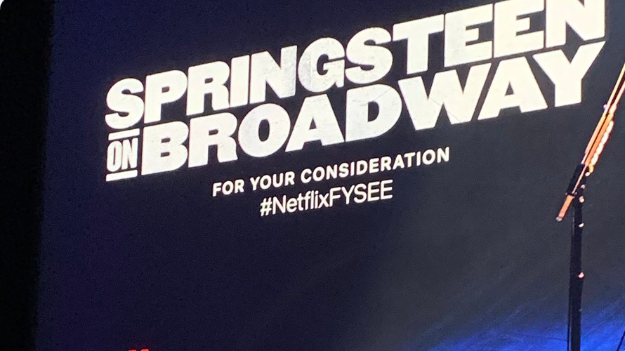 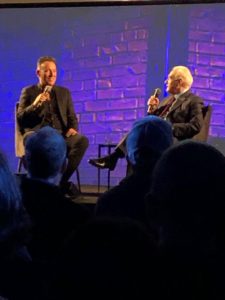 Tonight’s big ticket in LA was for two New Yorkers with new ties to Netflix: Bruce Springsteen and Martin Scorsese. The latter interviewed the former for the Emmy campaign for Springsteen’s “Live on Broadway” Netflix showing. Scorsese — who spoke with Bruce at Raleigh Studios — is now in the Netflix family as well, thanks to “The Irishman” being released this fall.

So it was a New York night in Hollywood, and the two men recalled that they’d actually met in 1975 at the Roxy nightclub on Sunset Boulevard via Robert De Niro. Bruce told Marty that his favorite line in any film is “You talkin’ to me?” from “Taxi Driver.” Scorsese revealed: “We still don’t know where that line came from.”

Introduced by Netflix’s Ted Sarandos, the pair talked about creativity and about Catholicism among other subjects. Bruce revealed that he’d recently stopped into his old Freehold, New Jersey church because he’d was compelled to go inside. A funeral was going on, but he stayed and sat in the back. He said the deceased — who was eulogized– “sounded like a nice man” but did pronounce the experience as “a bit bizarre.”

Springsteen also announced that he’s written a new album for the E Street Band. But we won’t be hearing it or seeing them on tour until 2020 because on June 14th the Boss is releasing a new solo album.

Netflix showed 45 minutes of the two hour “Springsteen on Broadway” show, which will undoubtedly be nominated for an Emmy and likely win one.  Among the guests, besides Emmy voters and press, were Jimmy Kimmel, Diane Warren, Irwin Winkler. Jimmy Iovine, and Phil Rosenthal.  Springsteen dazzled the crowd by playing two songs, “Dancing in the Dark,” and “Land of Hope and Dreams,” on his guitar. Regarding the Emmys, Bruce quipped that even with his illustrious career, “I’m here begging complete strangers to vote for me.”

Anyone who saw the Springsteen show on Broadway will be blown away by its translation to TV, that’s for sure. The 45 minutes is just a teaser for what was a once in a lifetime theater experience.

Meanwhile, Bruce has a new album coming June 14th, a new single now, and on Saturday night he joined E Streeter Little Steven van Zandt on stage at LA’s Saban Theater for three numbers– driving that crowd into a frenzy. Bruce is leaving no prisoners as he takes Hollywood. We’ll see him at the Emmys!