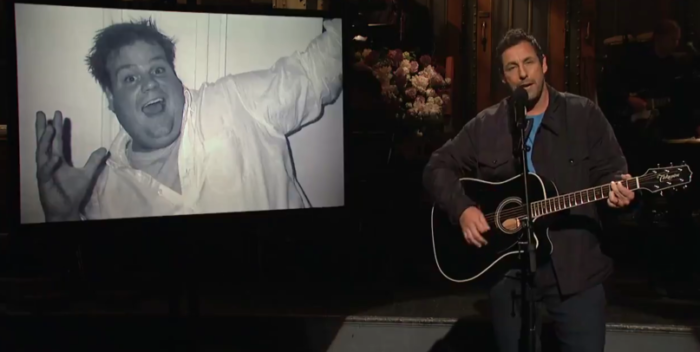 Adam Sandler left “Saturday Night Live” 24 years ago after he was fired, he sang last night, by Lorne Michaels. Then he went off to earn $4 billion at the box office with his movies, some good, some awful. He sang about it last night in a brilliant return that was mostly non political but tapped into nostalgia for 90s “SNL” with just the right nuance. He’s sung his “Chris Farley” song before, but it was a surprise last night and extra poignant on the show. Sandler has a Netflix movie about to debut and a stand up tour, but he didn’t explicitly plug them. He was more interested in mentioning twice how happy he was his wife and kids were in the audience and could see him return to his career-starting job. Jimmy Fallon and Kristen Wiig made surprise appearances, and they were excellent as well.