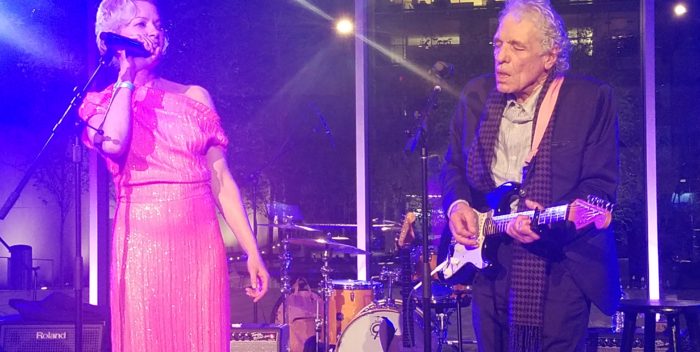 What a night! Despite a pissy rain and cold climes for May 1st, New York was on the go last night. First stop was the Tribeca premiere of A24’s “Skin” directed by Guy Nattiv and producer Celine Rattray at the SVA Theater followed by slinky party at downtown Tao on West 16th St. (Rattray’s partner, Trudie Styler, was also called out of town.)

Guests were lining up congratulate co-stars Vera Farmiga and Danielle MacDonald. Star Jamie Bell couldn’t make it, but he gives an award winning performance as a skin head white supremacist covered in tattoos who decides to leave his family’s racist cult and suffers the consequences. It’s based on a real story that Nattiv won an Oscar for this year as a live action short film. The feature version, re-imagined, gets a real premiere in July.

Then up we went to MoMA where superstar New York producers Ed and Annie Pressman were celebrating cult director Abel Ferrara and his museum retrospective. After showing Ferrara’s 1993 film, “The Addiction,” the guests headed in to the MoMA lobby for a rocking party featuring a band put together of Ferrara friends like Paul Hipp and Joe Delia. They played rockabilly, 50s rock, Lou Reed, everything but they needed vocalists. They found them in actors Willem Dafoe and Gretchen Mol, who each got up on stage and knocked it out of the park.

In the audience: Chris Walken and Annabella Sciorra (featured in the screened film), Julian Schnabel and new wife Louise Kugelberg, Debbie Harry, as well as Marla Hanson, famous in the 90s for being a model who was slashed, looking radiant and beautiful. (It was very nice to see her after a long time away!) It was like an old school night in New York, as the band played “Walk on the Wild Side” and Gretchen– who doesn’t seem to age– helped on back up and lead.

Thanks to Erik Kohn of Indie Wire who posted a cool pic of Dafoe singing on stage.

It happened, and it was glorious. pic.twitter.com/5co2PV5F5s