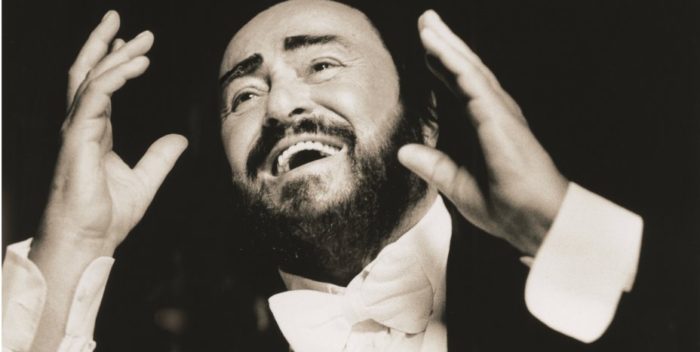 Oscar winner Ron Howard and his teams from Imagine and White Horse Pictures have made a sensational new documentary about opera legend Luciano Pavarotti. It includes rare interviews with the superstar tenor’s ex wife, his widow, his mistresses, and his daughters.

“Pavarotti” nonetheless is a joyous film about a genius who was larger than life and adored by millions, including all those women. He comes across as the Picasso of opera.

What this team really pulled off was finding rare footage of how Pavarotti sandbagged Bono of U2, and the whole group into writing a song for him, recording it with him, and performing at his charity. Pavarotti and Bono subsequently became great friends, but the way it all started has never been seen, and it’s hilarious.

When Bono dodged Pavarotti’s calls and letters, the tenor got on a plane and went to Dublin. He called Bono and said, “I’m waiting for you in the studio.” Bono said, but we’re in Ireland. And Pavarotti replied, “I am here.” Bono was shocked. Howard told me last night that Edge, Larry Mullen, and Adam Clayton literally hid in another part of the studio because they didn’t want to get involved with it. Why would this world renown rock band want to record with an opera star? It didn’t make sense.

Pavarotti called a press conference, and at it announced the band was singing with him at his charity. Bono first replies, on camera, that the band can’t do it, they’re busy. But when he realizes he’s cornered, he says, sheepishly, “When is it, exactly?”

Pavarotti lived an outsized life, and that comes across fully in the documentary, which comes out June 7th from CBS Films. Howard and crew remarkably, and very sensitively, weave the story of the singer’s mistresses into the one about his wife of 39 years, Adua Veroni, who speaks for the first time on camera about their life together. They had three daughters, who are also in film. But Pavarotti was a man of large appetites, and eventually he split from Veroni for a much, much younger woman. Nicoleta Montovani, even now only 49, was married to him for the last four years of his life. They also had a daughter, now age 15.

But the movie’s focus is on the music. There is nothing like this man’s voice in the world, and that is fully conveyed with clips from various performances and footage from his time with the The Three Tenors including his pals Placido Domingo, José Carreras, and conductor Zubin Mehta. You leave the theater on a high note- Pavarotti was famous for his high notes– on a white, puffy cloud of thrills. Thank Puccini for that, too, since “Nessun Dorma” still has that effect after almost 100 years.