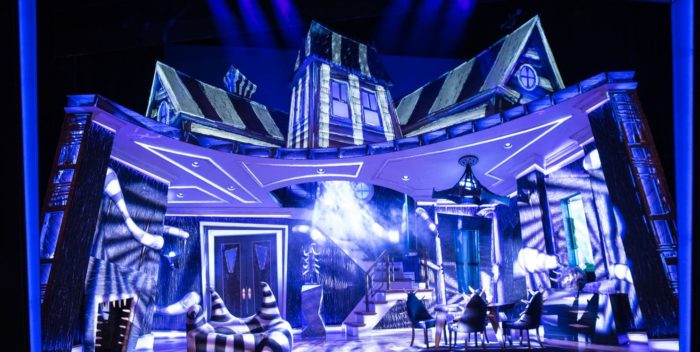 “Beetlejuice” debuted on Broadway last night, and it was just as good if not better than when I saw it a month ago in previews.

Alex Brightman in the title role is so much a whirling dervish who never stops, and is all consuming. He’s just terrific and certainly my choice for a Tony Award for Best Actor in a Musical. Leslie  Kritzer, such a hit in “Something Rotten,” is breathtakingly funny in a role created for her, Delia, the kooky maybe-fiancee of the man who has bought the haunted house where Beetlejuice and the recently deceased Barbara and Adam lived.

The movie has been a cult hit since it was released in 1998, but writers Scott Brown and Anthony King, director Alex Timbers, and composer Eddie Perfect have reimagined it so there’s a second act and several story arcs that begin and end. It’s not that I think they did a great job. Original co-screenwriter Dave Wilson, who I met last night, agrees.

Wilson wrote the movie with two partners, each now deceased– Michael McDowell and Warren Skaaren. Wilson told me he’s thrilled with what the new writers have done. “I’m so pleased,” he said, “they did a wonderful job.” Wilson told me how the three partners hatched the idea of the ‘m0st haunted house ever’ in which “the living are haunting the dead.”

“Right away,” he said, “we knew we had it. The idea was to be as over the top as possible. Anything goes.” They also knew there would be a big calypso number, although he’s not sure how they settled on “Day O.” But the song’s 95 year old writer, Irving Burgie, isn’t complaining. He returned last night to see the show  again.

Wilson told me there have been many attempts at approaching a sequel to “Beetlejuice.” But it’s not going to happen. “There were a lot of idea, they were all bad. And from what I hear, Michael Keaton has no interest in it. Let this musical be the sequel.”

There were lots of stars in the audience last night, including John Mulaney, Renee Elise Goldsberry, and Daphne Rubin Vega. Richard Kind brought his daughter (her twin brother went earlier in the week to see “Tootsie”).   I met Kritzer– who must win a Tony– and the hilarious Jill Abramowitz, who has a show stopping sequence as Beetlejuice’s hardcore mother. (You have to see her!)