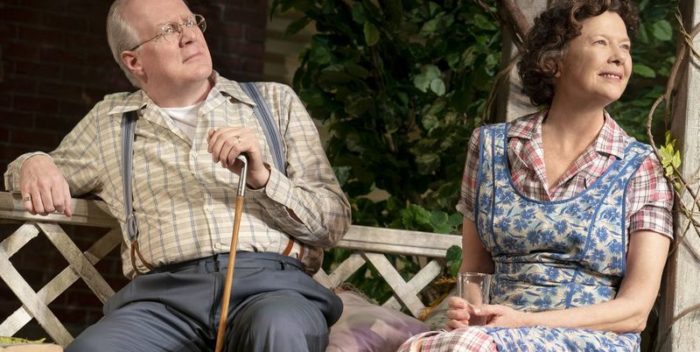 What a relief to see a real play. Arthur Miller’s “All My Sons” is back, directed with new insights by Jack O’Brien, and with sensational performances from Annette Bening, Tracey Letts, and Benjamin Walker, not to mention a newcomer named Hampton Fluker, as well as Michael Hayden.

Last night, opening night, the main performers were on fire. I really thought Tracey Letts was going to self-immolate. Annette Bening, too long not on Broadway, will now be welcomed back constantly. Ben Walker really comes into his own in this presentation. And so on.

So I was quite surprised to see Jesse Green (whom I don’t know) from the New York Times give this show a negative review. He is the only main theater critic who didn’t love it. On the other hand, he loved the grossly awful “Gary” with Nathan Lane. It maybe time for a vacation. The Times is not giving its readers accurate criticism.

“All My Sons” could not be more timely or topical, even though it was published in 1947 and refers to World War II. Joe Keller (Letts) has let his partner in a munitions factory go to jail after 21 pilots died from faulty manufacture. In fact, it was Joe who was responsible. Now the son (Fluker) of his imprisoned partner has come to seek revenge, while Joe’s family– purposely ignorant of his guilt– must grapple with his crime.

Sound like Boeing and their new 737? Or Volkswagen? Or Amtrak? Yep. It couldn’t be more relevant. Want to Make America Great Again? Well, Miller took his story from 1946 headlines, when America was supposedly “great.” People have always been flawed, and self deluded in how they rationalize poor behavior. Joe Keller is at the top of the list.

To make things worse, though, the Kellers lost a son, Larry, in the War. He plane was shot down, but his mother, Kate Keller (Bening) would prefer to believe he may come home again. For Miller, this was his 11th play, his first hit, and preceded his masterwork, “Death of a Salesman,” by two years.  In many ways you can see “All My Sons” as a precursor to “Salesman,” a notebook. The play is a little on the nose, but then far superior to anything else of the time.

The first act is the set up (there are three acts). By the second act, we’re moving, pieces of the backstory are peeled back like an onion skin, the audience is learning what the characters know: they should not be in the same room together. After what’s already occurred, they should remain at a great distance. Instead, it’s like their drawn back to a flame to see if it will kill them. It’s almost like Russian Roulette. And the closer they get to their emotional crisis, you want to jump on stage and advise them to leave.

Again, I loved Bryan Cranston in “Network” and Jeff Daniels in “Mockingbird.” So we’ll add Tracey Letts to the Best Actor in a Play category. He is remarkable. Annette Bening may be a slam dunk for Best Actress. All those Oscar nominations, and now finally she’s back. She’s given Kate her first real, understood delivery maybe ever. Bening is so good, and her show is current, that I do think The Tony Committee should give Elaine May a special Tony for “Waverly Gallery.” (And Joel Grey one for directing “Fiddler” in Yiddish.)

What a night! Bryan Cranston was there. So was Bening’s husband, Warren Beatty, front and center and backstage. Many stars showed up including Miller’s daughter Rebecca (writer and director) with her son Ronan Day-Lewis, Celia Weston, Annaleigh Ashford and actor husband Joe Tapper, Ben Platt, Bill Irwin, Bobby Cannavale, and my old friend Warren Leight, who had great news. After four years away he’s going to back be Executive Producer of “Law & Order: SVU.” His five years there were legendary. Now Dick Wolf is going to have him do seasons 21 through 25, at least. Bravo !