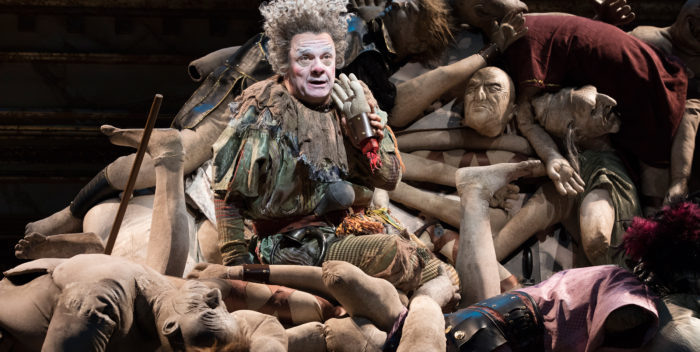 I don’t blame Nathan Lane. He’s a comic giant, along with Kristine Nielsen and Julie White. They are the best actors Broadway can summon. But Taylor Mac’s “Gary: A Sequel to Titus Andronicus” is utter crap. They are tortured on stage by a playwright who’s given them some of the worst material I’ve ever seen on a stage, Broadway or otherwise.

Do not trust the NY Times review except for one line: he doesn’t know if “Gary” will last a month. I do. It won’t. The audience fled from the performance I saw. If there had been an intermission for this 90 minute play, no one would have returned.

No one likes “Titus Andronicus.” It’s not a play that needs a sequel of any kind. Of all Shakespeare’s plays, you’d be best off to just leave it alone. But this Taylor Mac won’t do that. He thinks it’s funny that after the big battle at the end of the play, the curtain would rise on a mound of dead warriors (made from puppets) with flapping penises. Enter Nathan Lane as a former clown who is now a maid assigned to clean up the mess. Kristine Nielsen, who I adore, is already there. She’s in charge. For about ten minutes they do some shtick, they’re very funny, and you calm down. This may work out.

Nielsen is teaching Lane, who sports a Harpo Marx horn with a big red ball he can squeeze, how to remove the gas and feces from the dead bodies. That’s funny, very briefly. But then what? What is the point of this play? No one knows or cares about “Titus Andronicus.” And soon the pair are talking about absolutely nothing. Nothing. All the mugging and carrying on will not save them. Not even Julie White, who appears at midpoint, and distracts from the main problem: there is no play.

Nathan Lane has soared on Broadway. In “It’s Only a Play,” I was crying for laughing. Nielsen was a genius in “Vanya and Sonia and Masha and Spike.” Genius. Julie White can do no wrong. I felt for them on the stage at the Walter Kerr. There is just nowhere to go except in the abyss. If only they could remain on that stage and do something else. Anything else. Please. Just talk to the audience. We’d understand.

The author, Taylor Mac, has won a MacArthur Genius Grant, which puts that whole enterprise into question. He’s also won a Doris Duke Award, which I assume is named for the late, completely crazy heiress who used to give birthday parties on her front lawn for her llama. Now that would have made a great scene in “Gary.”

Want to see real play on Broadway? See “The Ferryman.”