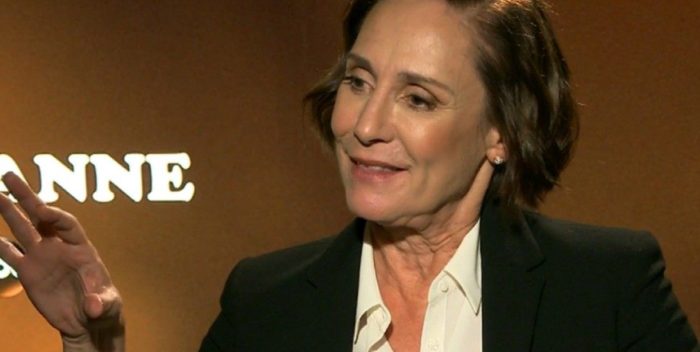 Last year, Laurie Metcalf won her second Tony Award in a row for “Three Tall Women.” OK, it was for a supporting role. But she’d just won the year before in lead for “A Doll’s House, Pt. 2.”

This year, she’ll be up again for playing Hillary Clinton in “Hillary and Clinton.” Will she win? Could be. Her competition is Janet McTeer, whose “Bernhardt/Hamlet” ran in the fall. (She was extraordinary.) And there’s Elaine May and Glenda Jackson, for “Waverly Gallery” and “King Lear.” Jackson won last year for “Three Tall Women.”

Well, just in case this year is a strike out, Metcalf has just been announced to star in Edward Albee’s “Who’s Afraid of Virginia Woolf?”(Didn’t we just have this play with Tracey Letts? Yes, in 2013, seems like yesterday.) Her co-star is Eddie Izzard, a weird choice, but ok. (Maybe he’ll be a cross dressing George.) Joe Mantello is directing. Russell Tovey and Patsy Ferran will co-star.

It’s a limited engagement, meant for Metcalf as a space bar between seasons of “The Conners.” Just like “Hillary and Clinton,” which ends July 21st.

Metcalf and John Lithgow are having a ball at the Golden Theater, where their Clinton dramedy-fantasy opens on April 18th. They’re so engaging on stage, you won’t want to miss them. Maureen Dowd recounts a few plot points in a story this weekend, so I don’t feel bad saying now that the play is a fantasy. Almost none of it happened. Playwright Lucas Hnath has just made it up. He doesn’t have any inside information, just the stuff we all know. He’s just reprocessed it dramatically, and with some sharp insights.

One thing about “Hillary and Clinton” that people may find jarring is the presence of Barack Obama on the eve of the 2008 New Hampshire primary. He basically blackmails Hillary out of the race. That didn’t happen, and wouldn’t have happened. The play makes no mention of John Edwards, whose actual lying about having a pregnant mistress cost Hillary votes and delegates. It was really Edwards’ fault that Obama picked up speed during that time.

But Laurie Metcalf is having her moment, her golden years. And why not?